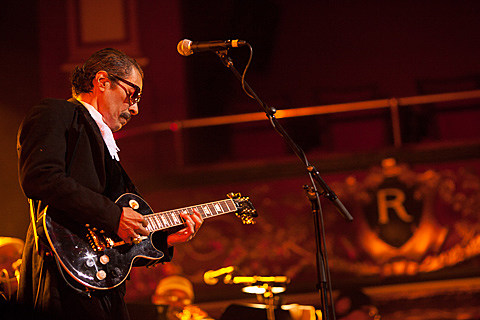 Cult R&B/soul musician Shuggie Otis has been making a pretty strong and well-desrved comeback since the 2013 reissue of his excellent 1974 album, Inspiration Information. He's been an active tourer since that reissue, and one of his shows was here in Brooklyn at Music Hall of Williamsburg in April, 2013. That show was recorded, and this past fall he released those recordings as his first-ever live album, Live in Williamsburg, on Cleopatra Records. You can listen to an Rdio stream of that album below.

Shuggie's heading back out on the road this year, and will return to NYC for a show on July 25 at BB King's, the same venue he played the night before that MHOW show. Tickets for the new NYC date are on AmEx presale now, and general on-sale begins Thursday (4/9) at noon.

UPDATE: Since this posting, more tour dates were announced, including a second NYC show happening July 24 at Brooklyn Bowl (tickets). All dates are listed, with the album stream, below...