"I've been da outcast all my damn life. Being gay & being raised in a religious household is not a great match. It's God HISSELF dats blessing me with everything I have from da knowledge to da wisdom, to da woman in my life & my career. Da devil is a liar!!!" -Shunda K

Shunda K with Yo! Majesty @ Highline Ballroom in 2008 (more by Faith-Ann Young) 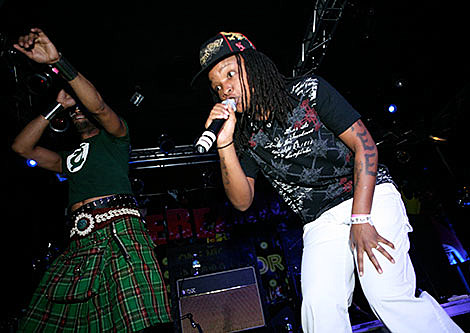 First there were three MCs in Yo! Majesty: Jwl B, Shon B and Shunda K. By the time debut album 'Futuristically Speaking... Never Be Afraid' dropped late last year, Shon B had left the fold. Jwl B and Shunda K then fell out very publicly, suggesting Yo! Majesty was over. Now, this is where it gets complicated. In January, Jwl B did some time in a Florida prison, leaving Shunda K flying solo and claiming her partner-in-rhyme was sacked from the group. Then when Jwl B got out, ignored her and rejoined the tour, Shunda K quit immediately. Shon B returned to take her place. Confused yet? You're not the only one. [NME]

To update that, Shunda K has announced that Domino Records (who released Yo Majesty's album in October 2008) dropped her. And that she's released two collections of songs, Shunda K Presents: The Best Eva Written...Outkast mixtape and Kollaborations, a collection of...collaborations, both for free online. Those two collections, with MP3 singles from each, are linked above. More info is pasted below.

Shunda K has tour dates scheduled around the East Coast and in her homestate of Florida. Those shows include some dates with Peaches, including tonight - Friday, June 19th at the Music Hall of Williamsburg with Peaches and Drums of Death (which is sold out).

Her ties to Peaches go beyond touring as well. Peaches appears on Shunda's new Kollaborations disc, and Shunda guests on the Peaches' song "Billionaire" off her new album I Feel Cream. A video of the pair performing that song in LA on June 6th, Yo! Majesty (without Shunda) tour dates (all in Europe), more album info, and all Peaches and Shunda K shows, below...

The first collection, The Best Eva Written... Outkast, is the beginning of the thematic "Best Eva Written" series which appropriates existing work (in this case, Outkast instrumentals) to illustrate a new overarching album concept (in this case, being a societal outkast.) 20 new tracks... hosted by France's DJ Keshkoon.