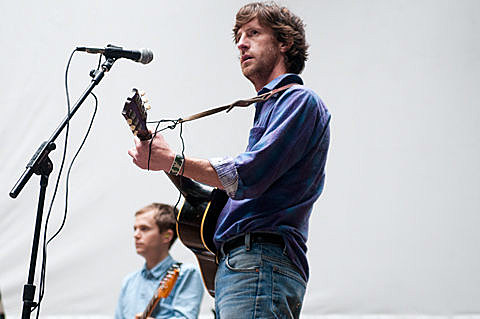 San Francisco lo-fi mavens Sic Alps have broken up, Pitchfork reports, with singer Mike Donovan announcing the band's end on Friday (7/12) at the final gig of the band's European tour.

Sic Alps started in 2004, and for a long while they functioned as a duo with Donovan on vocals/guitar and Matt Hartman on vocals/drums. Sometimes they switched places. They added members -- like Ty Segall on drums for a while -- and expanded and contracted more than once. For me, they were always best as a duo, with that giant monolith of speakers between them.

A couple years ago, Hartman quietly left the group and Donovan carried on under the Sic Alps name. With a solo record due out on Drag City this fall, it seems as much like Mike Donovan has decided to record under his own name as it is Sic Alps breaking up.

Mike Donovan's Wot is out October 15.

Filed Under: Bill Pearis, breaking up, Sic Alps
Categories: Music News
Comments
Leave A Comment
Back To Top
RELIVE IT: The 2019 Coney Island Mermaid Parade in pics
Here are the 2021 Golden Globes Winners
Ian North of Milk N’ Cookies has died
Watch the trailer for ‘Poly Styrene: I Am A Cliché’
Marc Maron knows who Kevin Morby is now — watch their interview
This Week’s Livestreams (Liz Phair, The Hold Steady, Tigers Jaw, Acid Mothe…
20 New Rap and R&B Songs Out This Week