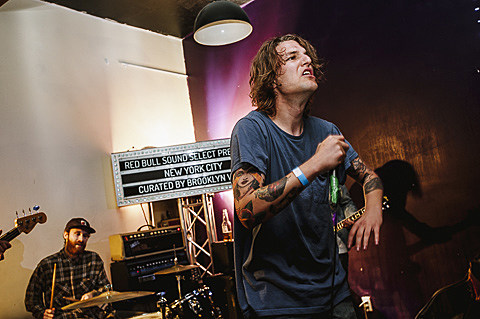 When we first heard Sick Feeling's tracks on Soundcloud, they came off like a scuzzy lo-fi punk band, but "Liberal Arts," the first single from their debut LP, Suburban Myth, is much different. This one has the band -- whose lineup includes members of Ink & Dagger, Trail of Dead, Trash Talk and more -- sounding more like something that could've come out on Equal Vision in 2001. The production is much higher quality than those early tracks, the riffs are dissonant and metallic, and singer Jesse Miller-Gordon sounds like he's killing his vocal cords with every note. It's a great song, and you can check it out (via FADER) below. The album comes out January 20 via Terrible Records and Geoff Rickly's Collect Records.

Sick Feeling will also be touring the West Coast in November with Geoff Rickly's band United Nations, which is pretty much a perfect pairing. All of those dates are listed, with the new song, below...