photo: Sick Feeling at BV-RBSS show at Palisades in 2014 (more by Ryan Muir) 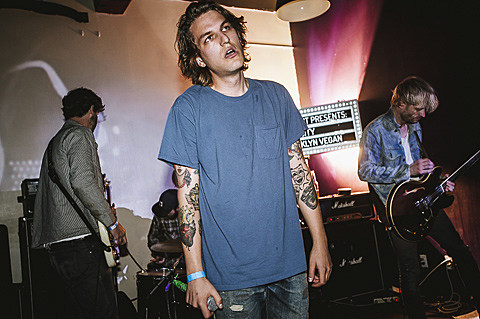 Last week came the unfortunate news that Ireland's Girl Band had to cancel their NYC shows (visa issues), including the one happening Wednesday (1/14) at Baby's All Right with Big Ups. On the bright side, Big Ups will instead be joined by another great band, NYC hardcore rippers Sick Feeling, as well as Flagland and Downies. Tickets are still available. It's the only upcoming date at the moment for both Big Ups and Sick Feeling.

Sick Feeling are a week away from releasing their debut album, Suburban Myth, due 1/20 on Geoff Rickly's Collect Records. You've already heard the immensely heavy lead single "Liberal Arts," and since we last spoke the band released two more equally crushing songs, "Gave Back (Suburban Myth Part 1)" and "The Americans." Check them out below.