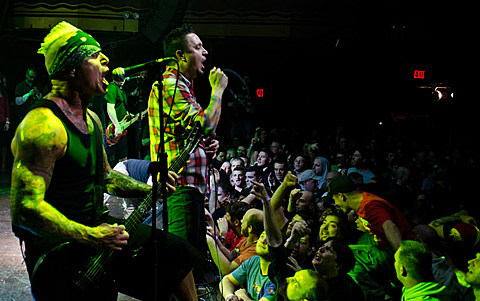 When word got out that Sick of It All and Cro-Mags would co-headline a show at Webster Hall on Friday July 6th as part of the CBGB Festival, my water almost broke. I didn't even bother to wait and see if BV could somehow sleaze my bald ass into that sucker; I toddled over to Ticketweb and did the right thing and ponied up for a ticket. Your man Klaus was PUMPED. However, as you may or may not know, your man Klaus is sort of a mess in the old mental-stability department and on the day of the show I had an attack of the old agoraphbees. And it wasn't because of what the show was; it could have been a show featuring Devendra Banhart fluffing pillows and I still would have succumbed to the agoraphobic explosion occurring in my brain. So rather than put myself in a loud, sweaty, crowded room I opted to stay home curled up in a ball in the middle of my living room floor. As a matter of fact, the ticket for the show is literally still sitting in my bag.

As it turns out, my attack of agoraphobia may have been more a prophecy than a sign of my own mental weakness. For, as you all must know by now, the show was called off when Harley Flanagan went on an alleged rampage of alleged self-defense (depending on who you talk to), that resulted in stab wounds and bite marks. What luck! So the show was cancelled and everyone had to go home. I've been wondering since then if Webster Hall, Ticketweb, or the event organizers would make up for the fact that nobody got to see the two bands that clearly everyone was there to see. And then, WHAM, the following message landed in my inbox today:

Thank you for your patience in waiting for this rescheduled date.
Sick of it All is psyched to announce the rescheduled date for the missed performance on July 6th.
On September 7th, we'll be joined by our good friends and New York Hardcore legends CIV(!!), at Webster Hall with very special guests.
Due to the unfortunate events that resulted in the postponement, the Cro-Mags will not be playing.

All tickets purchased for the July 6th show through Ticketweb will be changed into WILLCALL list tickets, which means your name will be on a list at the door, and you just bring your ID - not your original ticket. Previously purchased tickets will be handled this way to avoid issues with the many people that may not have their original ticket.

If you have already received a refund, you will NOT be on the willcall list and your barcode has been invalidated on your existing ticket.
New tickets will be on sale Thursday (August 9th) at 10am at Ticketweb.

If you are unable to attend and would like a refund, please email refunds@ticketweb.com - refund requests must be received prior to August 17th.

Got a question? We're here to help. Email us at thestudio@websterhall.com

I know Cro-Mags are basically hardcore legends, and I am sure I am going to get raked over the ever glowing comments coals for saying this, but I'd take CIV over them any day. So for me, even though no other bands have been announced on the line-up (Quicksand?) (Please?), this is already a more than adequate make up date. See ya there!