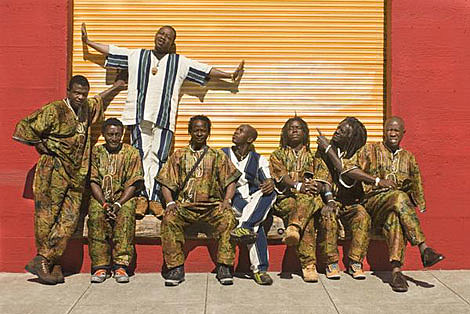 Sierra Leone's Refugee All Stars played an intimate acoustic set at the University of Vermont's Ira Allen Chapel on Tuesday [4/6], celebrating the release of their new album "Rise and Shine," from Charlotte's Cumbancha record label, and preparing for their performance at Higher Ground's Showcase Lounge [on Wed 4/7].

About 100 people gathered in the chapel to watch a short excerpt from the film, "Sierra Leone's Refugee All Stars," [which tells the story of their experiences in Sierra Leone's brutal civil war and the formation of the band]....After the screening, the band came out and played a couple of songs....The band took a quick break to answer questions from the audience about their music and the film, but jumped back into more music aafter only three short questions. The pews in the Ira Allen Chapel didn't allow the audience much room to dance, but Alhadji Jeffrey Camara (aka Black Nature) took the microphone soon after the Q&A had ended and got everyone on their feet.

Bandleader/ Songwriter Reuben Koroma said that despite the long flight, the band was not tired, and was excited for [Wednesday's] show. [Burlington Free Press]

Sierra Leone's Refugee All Stars kicked off their US trip, which runs into May, with a pair of shows in Burlington, Vermont.

They tour in support of their new record, Rise & Shine, which came out March 23rd on Cumbancha (and which you can preview here).

The group visits NYC for a show on Wednesday, April 14th at Highline Ballroom. Also on the bill are Bajah & The Dry Eye Crew and True Panther act and "Bubu King", Janka Nabay. Tickets are still on sale.

Clips from the doc and new album promos, album cover art and all tour dates are below... 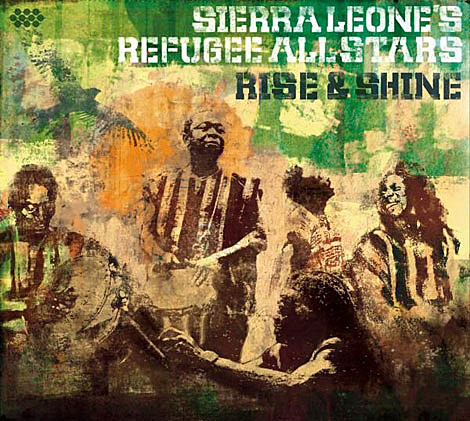 Sierra Leone's Refugee All Stars - Freetown and Beyond