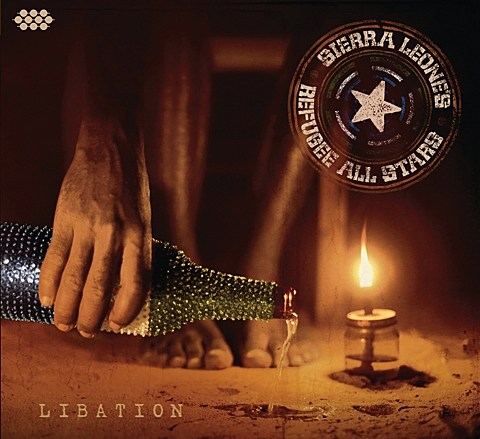 This album celebrates the 10th Anniversary of the making of our first album Living Like a Refugee. Since that first album we've lived a life that once seemed unimaginable; we have toured the world, released more albums, and shared our music with thousands upon thousands of friends and fans. But while we keep rolling we never forget our roots. So this is our musical libation - an offering - to celebrate the blessings that our music has brought to us, to pay respect to the spirits of the musical brothers we have lost along the way, and to pay tribute to Mama Salone - the country whose culture, traditions, and rhythms infuse our music and fill our souls with pride.

Sierra Leone's Refugee All Stars (literally a band of refugees from Sierra Lone) will release their fourth album, Libation, on March 18 via Cumbancha. It was produced by Chris Velan who also did the band's debut, and mixed by Iestyn Polson, who's worked with David Bowie, Patti Smith and others. You can listen to two of its tracks, "Gbaenyama" and "Rich But Poor," along with a sampler of the whole album, below.

The band will also be going on a tour in April and May which brings them to NYC on April 5 at Apollo Theater. That show is part of the second edition of AFRICA NOW!, "the weekend festival spotlighting today's African music scene." Also playing is Mali's Fatoumata Diawara and Senegal's Les Frères Guissé. Tickets are on sale now. More details on the weekend's events here.

All dates are listed, along with those streams, below...