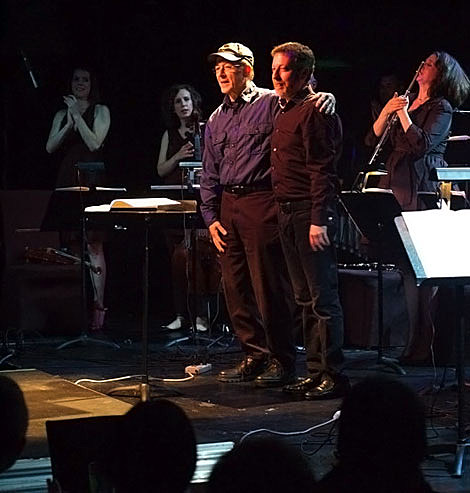 Signal commemorated Steve Reich's 2009 Pulitzer Prize-winning piece "Double Sextet" with a performance of the work on June 22nd at (Le) Poisson Rouge. The night consisted of an early set and an added late set, both of which also included a performance of Reich's 1984 piece "Sextet." Wordless Music put on the show -- they're hosting Johann Johannsson and American Contemporary Music Ensemble at the venue tonight (doing an early and late show as well). Martin Longley was there...

Each time Signal perform at (Le) Poisson Rouge, the line around the block gets longer. Both the club and this stripling new music ensemble have established their stellar reputations in a very short time. It helps that Signal are apparently beloved by their chosen composers. Michael Gordon, Philip Glass and Steve Reich have all endorsed the ensemble's readings of their work, not least by attending the concerts. On this Monday night, Reich makes his third outing for a Signal gig, as they perform his rarely heard "Double Sextet," from 2006, which is as-yet unrecorded. He's waiting for a suitable disc-length sequence of pieces to suggest itself. The early set is sold out, lengthening the line for the 10pm show, which also looks pretty much at full capacity. Rather radically, the ensemble are actually set-up on the raised stage, rather than spreading out over the central floor-space. This time, the program calls for a smaller version of Signal's ever-adaptable membership. It's also the first birthday of (le) Poisson Rouge, further adding to the sense of occasion.

The set opens with Reich's original "Sextet," from 1984. It's one of his slowest, most spacious works, dominated by marimbas, vibraphones and large bass drums, with piano-keyboards acting as a central spine. The vibraphones are frequently bowed, helping to maintain shimmering sustains, with mallets later employed as clicking time-keepers. After a short break, the Pulitzer Prize-winning "Double Sextet" literally features twelve players, with the six-piece instrumentation identically mirrored. There's cello, violin, keyboard, flute, clarinet and vibraphone, times two. Gutbucket's Ken Thomson is playing one of the clarinets. Conductor Brad Lubman had sat out for "Sextet," but his skills are now required for this piece. Once again, the melodic material is not typically Reichian. There's a less dense structure, with more variable interaction between the elements, and an increased sense of dynamically capering unpredictability. There are moments where half of the complement takes on a group sound that seems to be replicating the sound of a harmonica, a melodica or maybe even a Chinese sheng mouth-harp. Tight aggression is contrasted with open sections, as the piece clenches and unclenches with regularity over its twenty-or-so minutes. It feels like a short overall performance, with both works being of roughly the same duration, but this tends to highlight their sumptuous nature, like concentrated delicacies.

Where Philip Glass was spotlighted at his rear table on the last occasion, Reich is more extroverted, climbing up on stage to hug and kiss the Signallers. The applause is lengthy, and completely justified, extended even further by the composer's presence.