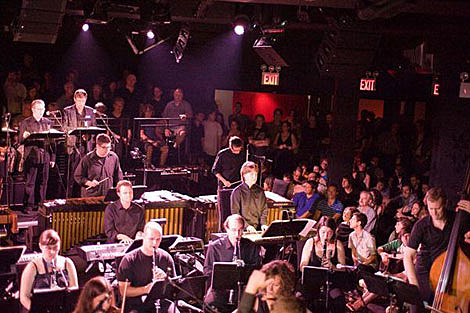 New music ensemble Signal will visit (Le) Poisson Rouge on Sunday, April 11th for two performances of Philip Glass's 1981 album Glassworks (its NY live premiere) along with Glass's "Music in Similar Motion" and other works. Tickets for the early set and late set are both on sale. Clips from Glassworks are posted below.

Also coming up, Signal will be at Merkin Hall on May 27th to debut a new piece by Nico Muhly and UK composer Harrison Birtwistle's The Corridor (its US premiere). The show is part of Kaufman Center's Contemporary Contexts series and Face the Music, "Kaufman Center's critically-acclaimed teen ensemble," will open with a pre-show performance of Muhly's "Honest Music" and "How About Now." Tickets are on sale for that.

Nico Muhly (who worked on the new albums by Jonsi and Sam Amidon, and who played himself quite a bit at Big Ears Fest) was commissioned along with composers Sean Shepherd and Matthias Pintscher to write a piece for Contact!, the NY Philharmonic's new music series that kicked off last December. All three pieces debut April 16th at Symphony Space (and played again a day later at Metropolitan Museum of Art). Tickets for Symphony Space show are on sale.

Outside of NYC, Signal travels upstate to join Eastman School of Music's Musica Nova and others in performing Steve Reich pieces in Rochester and Buffalo this May and June (works include Music for 18 Musicians and Pulitzer winning Double Sextet).

Another thing Signal has on its calendar is the 2010 Bang on a Can Marathon, set for Sunday, June 27th, noon-midnight, at World Financial Center Winter Garden. At the fest, the group will participate in Shelter, a multimedia work co-composed by BoaC founders Michael Gordon, Julia Wolfe and David Lang. The initial lineup also includes the US premiere of Professor Bad Trip by Fausto Romitelli. A video of that piece is below.

Most recently, Signal joined Shara Worden and others to perform Sarah Kirkland Snider's Penelope at Galapagos on Saturday, April 3rd.

All the above-mentioned videos posted below...