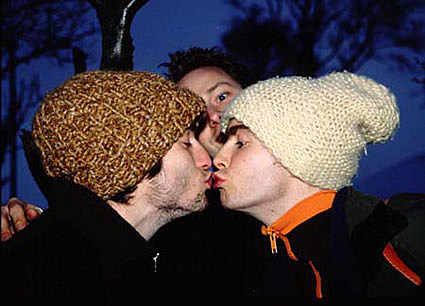 You already heard of this band called Sigur Ros, and you know about the NYC show, but maybe you didn't hear all about the new Heima DVD and Hvarf / Heim Double CD....

Sigur Rós have confirmed a November 6 street date for two separate but related releases: a DVD called Heima and a double CD set titled Hvarf / Heim. Both will be issued in the U.S. on the XL label.

Heima-which translates as both "At Home" and "Homeland"-- chronicles a series of free concerts Sigur Rós played in their native Iceland over the course of summer 2006. Combining both the biggest and smallest shows of their career, the entire tour was filmed, and now provides a unique insight into one of the world's most fascinating and inscrutable bands captured live while exploring their natural habitat like never before. The film is currently being edited by Nick Fenton with direction from the Oscar-nominated Dean DeBlois.

The culmination of more than a year spent promoting their hugely successful Takk... album around the world, the Icelandic tour was free to all-comers and went largely unannounced. Playing in deserted fish factories, outsider art follies, far-flung community halls, sylvan fields, darkened caves and the huge horseshoe-shaped Asbyrgi canyon (formed, legend has it, by the hoofprint of Odin's six-legged horse Sleipnir), the band reached an entirely new spectrum of the Icelandic population; young and old, ardent and merely quizzical, entirely by word-of-mouth.

Material from all four of the band's albums is featured, including many rare and notable moments. Among these are a heart-stopping rendition of the previously unreleased 'Guitardjamm', filmed inside a derelict herring oil tank in the far West Fjords; a windblown, one-mic recording of 'Vaka', shot at a dam protest camp subsequently drowned by rising water; and first time acoustic versions of such rare live beauties as 'Staralfur', 'Agaetis Byrjun' and 'Von'.

The Hvarf / Heim CD is made up primarily of two EPs. The title of the first, Hvarf, translates appropriately as "disappeared," as its five tracks are new recordings of lost songs from various points in Sigur Ros's history. The first three, 'Salka,' 'Hljomalind' and 'I Gaer,' were never released either because they were not recorded, or because they were recorded and then not included on a finished album. The fourth and fifth, 'Von' and perennial live favorite 'Hafsol' are radical and complete reimaginings of songs from the band's first album, the original versions of which were recorded by the band's Jonsi Birgisson and Georg Holm with drummer Agust Gunnarsson prior to Kjartan Sveinsson and Orri Dyrason joining the band.

An alternative translation of "Hvarf" is "haven," which ties into the title of the second portion of this release, Heim, or "home." Heim's six tracks are live acoustic versions of songs from all four Sigur Ros studio albums recorded in Iceland either during the band's summer 2006 tour or early this spring. The unplugged scenario had been pretty much imposed on the band, there being no power at some of the locations. Four of the songs here ('Untitled 1,' 'Unititled 3,' 'Agaetis Byrjun' (never performed live before this last summer) and 'Heysatan') were played acoustically on the road during the summer tour, with the remaining 'Staralfur' and 'Von,' being first interpreted for a protest concert against a planned road development next to the band's studio in the artistic community of Alafoss, back in February 2007

There will be an exclusive screening of Heima Sept. 14 in Akureyri, Iceland, which will be followed by the film's official premiere on Sept. 27 in Reykjavik on the opening night of the Icelandic International Film Festival which runs from Sep 27 - Oct 7.