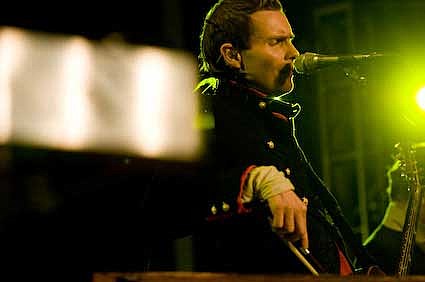 Nat Geo Music, the music division of National Geographic Entertainment, will Webcast an open-air Náttúra concert live from Iceland on Saturday, June 28, 2008. Two of the world's most important and visionary musical entities, Björk and Sigur Rós, will headline the free concert.

The event will be available exclusively at worldmusic.nationalgeographic.com from 3 p.m. to 8 p.m. ET (begins at 8 p.m. BST/London or 7 p.m. GMT/Reykjavik).

To be held in a large park near the centre of Reykjavik, all of the performances will be during daylight, with Iceland's capital city and dramatic rolling scenery providing a perfect backdrop to what is expected to be one of the biggest concerts the country has seen. The Náttúra concert looks to raise awareness of the impact of the growing aluminum smelting activity on Iceland's natural landscape.

Tickets for the two upcoming Sigur Ros shows in NYC are on sale.