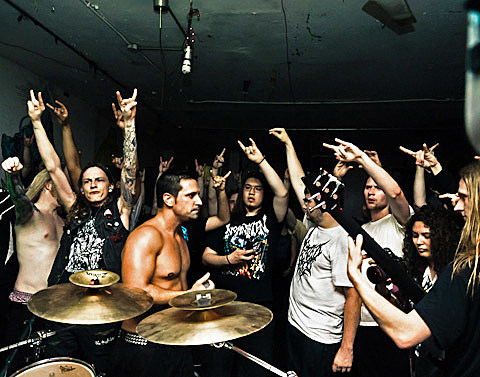 "The Silent Barn is an immersion into the art of New York City as it lives. It's a double-floor music venue inside of a kitchen, an independent video games arcade, an art theater & performance space, a party surveillance system, a zine library, a museum of gigantic murals, and a home for Castle Oscar. Founded in 2004, The Silent Barn is now grandfather to a beautiful re-emergence of similar spaces across Brooklyn, and a quintessential model for all-ages DIY art and music culture in America. It resides proudly alongside Flux Factory and the Museum of the Moving Image as a rare contemporary art institution in Queens, New York. It has long been the headquarters of both Showpaper and Babycastles, young and booming art institutions in NYC. It has birthed the careers of The Dirty Projectors, Dan Deacon, Future Islands, Deerhunter, Teengirl Fantasy, Vivian Girls, Real Estate, The Black Lips, Pictureplane, and many, many others.

A recent and massive theft has put the Silent Barn in a position to temporarily close operations, and we are viewing this as an opportunity to begin our transition into a viably permanent, resilient, and safe part of New York City. After several years of a rotating cast of operators, including Skeletons, Todd P, John Chavez, and Andy Borsz, The Silent Barn has settled into permanent marriage to G. Lucas Crane (Woods, Nonhorse), Joe Ahearn (ART on AIR, Showpaper), Kunal (Loud Objects, Babycastles), and Nat Roe (WFMU). We are working to co-sign a new 5-year lease for Silent Barn, officially making this a long standing piece of New York City.

We are now raising up to $80,000 in order to ensure the viability of The Silent Barn as a permanent all-ages venue for independent and experimental music, games, and art...."

That blurb comes from the DIY venue's new Kickstarter page which they're using to raise the money. As of this posting, they're at $3,912 already. Those who pledge $1000 or more will get free admission to the venue for life. Those who pledge $10 get some stickers. There are lots of other prices and prizes too. Check it out.

Check out a video of Dirty Projects playing the Queens venue below...