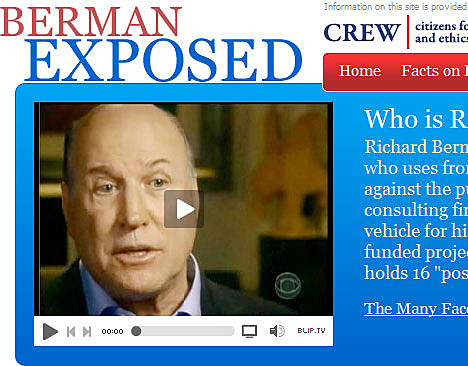 Richard Berman is a Washington, D.C.-based hired gun who uses front groups to defend his corporate clients against the public interest. Using his lobbying and consulting firm, Berman and Company, as a revenue vehicle for his activities, Berman runs at least 15 industry-funded projects, such as the Center for Union Facts, and holds 16 "positions" within these various entities.

As the Internet is reporting, David Berman of Silver Jews posted the following two break up messages in the Drag City message boards today...

Cassie and I went to the cave and it looks great. 58 degrees but the humidity makes it feel like 72.

A dollar per song. Plus Arnett Hollow. I don't

want to keep you underground for too long. Fall Creek Falls State Park State Lodge is great by the way.

Yes I cancelled the South American shows. I'll have to see the ABC Countries another way.

I guess I am moving over to another category. Screenwriting or Muckraking.

I've got to move on. Can't be like all the careerists doncha know.

I'm forty two and I know what to do.

Cassie is taking it the hardest. She's a fan and a player but she sees how happy i am with the decision.

I always said we would stop before we got bad. If I continue to record I might accidentally write the answer song to Shiny Happy People.

What, you thought I was going to hang on to the bitter end like Marybeth Hamilton?

My Father, My Attack Dog

Now that the Joos are over I can tell you my gravest secret. Worse than suicide, worse than crack addiction:

You might be surprised to know he is famous, for terrible reasons.

An exploiter. A scoundrel. A world historical motherfucking son of a bitch. (sorry grandma)

You can read about him here.

My life is so wierd. It's allegorical to the nth. My father went to college at Transylvania University.

You see what I'm saying.

A couple of years ago I demanded he stop his work. Close down his company or I would sever our relationship.

He refused. He has just gotten worse. More evil. More powerful. We've been "estranged" for over three years.

Even as a child I disliked him. We were opposites. I wanted to read. He wanted to play games.

He is a union buster.

When I got out of college I joined the Teamsters (the guards were union organized at the Whitney).

I went off to hide in art and academia.

I fled through this art portal for twenty years. In the mean time my Dad started a very very bad

His clients include everyone from the makers of Agent Orange to the Tanning Salon Owners of America.

The worst part for me as a writer is what he does with the english language.

Though vicious he is a doltish thinker

and his spurious editorials rely on doublethink and always with the Lashon Hara.

As I studied Judaism over the years, the shame and the shanda,

grew almost too much. my heart was constantly on fire for justice. I could find no relief.

undoing a millionth of all the harm he has caused. To you and everyone you know.

Literally, if you eat food or have a job, he is reaching you.

I've always hid this terrible shame from you, the fan. The SJs have always stood autonomous and clear.

Hopefully it won't contaminate your feelings about the work.

My life has been riddled with Ibsenism. In a way I am the son of a demon come to make good the damage.

Previously I thought, through songs and poems and drawings I could find and build a refuge away from his world.

But there is the matter of Justice.

And i'll tell you it's not just a metaphor. The desire for it actually burns.

There needs to be something more. I'll see what that might be.

if you want to know what evil Herr Attackdog is currently up to look here: