Vattnet Viskar at SXSW in 2013 (more by Greg Cristman) 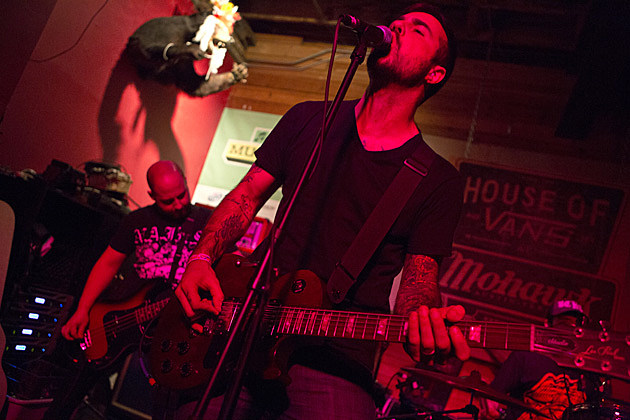 New Hampshire's Vattnet Viskar will be embarking on another road trip this July. The atmospheric black metallers with a doom streak have been racking up the miles since releasing 2013's Sky Swallower. The band is going strong, but the van has apparently taken a beating. "Hangin tough in July with the homies in Silver Snakes," the quartet announced via their Facebook page. "Our van has no air conditioning."

A sweaty Vattnet Viskar will connect with Los Angeles' Silver Snakes for seven dates including July 21 at Brooklyn's the Acheron. (Advance tix should be on sale soon.) That engagement comes in the middle of Silver Snakes' trek across the States that pairs the Bridge 9 band with many different tourmates, such as Aeges, Planes Mistaken for Stars, Devourment, and Lions of Tsavos. And, like their eclectic list of buds, Silver Snakes are something of a versatile tweener. Their newest album, Year of the Snake, mixes together the post-hardcore/alt. rock melancholy of Shiner and Miltown with ageless indie rock hooks, rootsy earnestness, and aggressive onslaughts that wouldn't be out of place on a slab of sludge. Catchy, heavy, honest.

All dates are listed, with a stream of Year of the Snake, below...