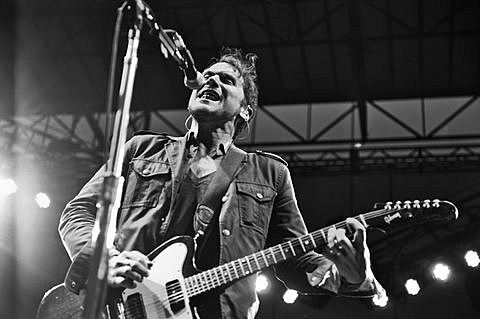 Silversun Pickups released their third album, Neck of the Woods, earlier this year and you can stream three of its tracks below. The band will be supporting the new album with a tour which begins this September. The first leg of that tour has already been announced, and the band just revealed some October dates as well including New Orleans festival Voodoo Music Experience and a NYC show which happens on October 14 at Terminal 5 with Cloud Nothings and Atlas Genius. Tickets for that show go on sale Friday (8/24) at noon.

Hopefully Cloud Nothings will add a small DIY show while they're here like they did the last time they came to NYC for a big show. The dates with Silversun PIckups come after Cloud Nothings wraps up their own North American tour in September. They recently pushed back the release of their Live at Grog Shop 12" which was supposed to come out this past July, to September 25. They also recently recorded a performance of "Fall In" for For No One TV, which you can watch below.

All lists of dates, video, and streams are below.

Cloud Nothings - "Fall In" on For No One TV