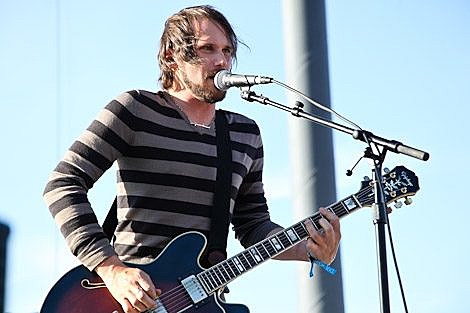 Silversun Pickups will be in NYC for a set at All Points West on Sunday, August 2nd. It's their first NYC-area show in a while, and their only NYC-area, public show in support of their new album, Swoon, which came out in April on Dangerbird Records. I say it's their only "public" show because they're also playing a private show two days earlier, July 31st at 4:30pm. Presented by iheartradio, the free gig will take place at the new PC Richard & Son Theater (32 Sixth Ave) (capacity of about 200 people). Tickets are required, and we have ten pairs of them to giveaway. Details below.

The video for "Panic Switch," off the new record, with clips from the band's recent MTV Unplugged performance, all tour dates, and details on the ticket giveaway, below...

For your chance to win a pair of tickets to the Silversun Pickups show on Friday, send an e-mail to BVCONTESTS@HOTMAIL.COM with the word "SILVERSUN" in the subject line. You must be 18 years or older to win. Include your first and last name. Winners will be picked at random and contacted. The show starts at 4:30pm and door open at 3pm and lasts about a hour. The venue is general admission, so it's first come first serve. Winner's names will be placed on a guestlist at the door. Photo ID is required to check in. If guests are under the age of 18, they must attend the show with a parent, guardian or someone over the age of 18. Location: 32 Avenue of the Americas (between Walker Street and Lispenard Street) New York, NY 10013. The building is a large brick building with an AT&T logo on the front. The theater is on the ground floor. When you come in, it is to the immediate left.