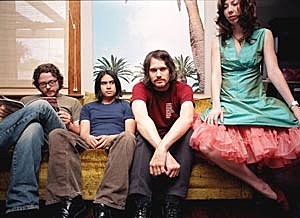 "Coming up on their five-year anniversary, Silversun Pickups are finally working on a debut album. If you're thinking that's a bit of a laidback attitude for a band, well, lead singer Brian Aubert won't argue with you. Left to their own devices they might still be "fiddling around" in some L.A. garage." [Chart Attack]

"Buried for their official CMJ showcase at The Ace of Clubs at the same time as The Arcade Fire was playing Summerstage, they made the most out of their short time at the Fader Room on Orchard Street by nearly rocking the amps off the stage during a blistering and surprisingly loud set. Expect to hear their name come up a lot more in the coming year. They were fantastic." [CV's CMJ RECAP @ Gothamist]

* Listen to songs at their official site 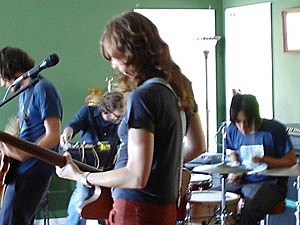 "Los Angeles-based Silversun Pickups are deceptive. You would never get it from looking at them (or even listening to their EP, Pikul), but they play a wonderfully swampy brand of noisy riff-rock -- sort of like if Queens of the Stone Age were fronted by a total wuss (and that's a compliment). Their secret weapon is bass player Nikki Monninger: She delivers a fat low end that Sabbath fans would dig, and she has a wonderfully spastic stage presence that suggests a robot hopped up on Pop Rocks and Coke (and that is also a compliment). (KA) [SPIN's CMJ RECAP]

* Listen to songs at their MySpace page

"This is my 3rd post on Silversun Pickups, an LA band whose debut EP, Pikul, was released recently. Now I'm sure you've already heard the first single, "Kissing Families," but the whole EP sums up why I love EPs so much. It is reminiscent of TV on The Radio's or the Yeah Yeah Yeahs' debut EPs in that it is the perfect length: short enough to leave you clamoring for more, yet just long enough to serve as a great introduction to the strengths of this superior band." [Gorilla vs. Bear]

* Get their EP at Amazon 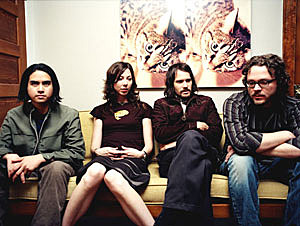 "These guys played the Fader lounge, meaning they had a 20-minute set in a not-very-crowded venue with ample air conditioning and plenty of cold refreshments. And yet, look at the fucking back sweat on the guy. THAT IS HOW HARD THEY SLAYED. Seriously. A four song routine and the dude looks like he just clocked in at under three hours at the Boston Marathon. Needless to say, can't wait to see these guys again. Heavy as shit, mother fuckers!" [TOTC's CMJ Wrap-Up]