SMD at Williamsburg Waterfront in 2009 (more by Bao Ngyuyen) 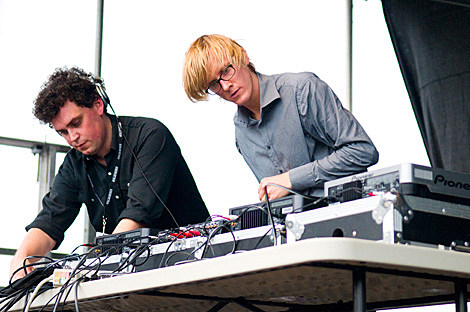 Simian Mobile Disco are kicking off an international tour this month which begins with a DJ set on Saturday, August 6 at Warm Up. They'll also DJ a FIXED party later that night (8/6) at Public Assembly with FIXED DJs JDH & Dave P. Tickets for the Public Assembly party are on sale now.

Simian Mobile Disco recently made a mixtape for Feel My Bicep. According to the duo, "This mix is a little bit different to our club sets - mixture of more leftfield early electronics, krautrock, ambient etc..." They've also got a new video for "Gizzard" and a trailer video for their Summer 2011 live show. Check those out along with all dates, FIXED flier, and the full PS1 lineup below...