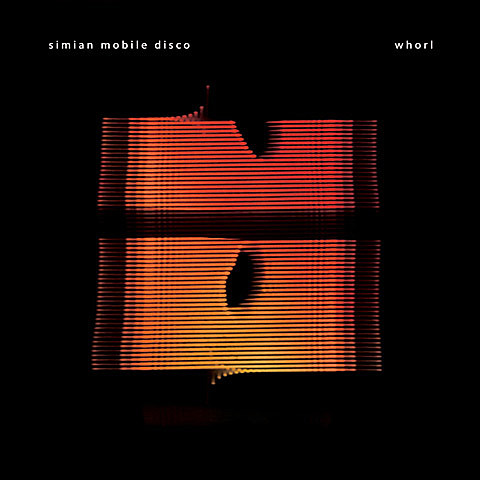 Simian Mobile Disco's new album, Whorl, is due out September 9 via Anti. The process for making this one was a little unusual, at least in 2014: the record was recorded live. mostly from a show at Pappy & Harriet's in Pioneertown, California. No laptops, no Ableton, just modular synths and one sequencer each for James Ford and Jas Shaw. That's the album art above, a snippet from first single "Tangents" can be heard in an album trailer below, and Shaw elaborates on the recording process:

The recordings we did in the studio while we were writing and rehearsing the new material for Whorl were simply "live" takes - the system we're using has limited ability to save patterns in the sequencer, but nothing like the flexibility of a computer. Live performance and studio composition are essentially now the same process, rather than the common method of writing a track using the computer, and then working out ways to perform it live. We planned not to slavishly limit ourselves just to this performance - when we came to mixdown the album, we used portions of three sessions - the show itself, an extended jam we did in the desert the day before, and a little of our London studio rehearsal.

A tour is planned where the duo will perform Whorl in much the same way as it was made. Only dates announced so far for those are Tokyo and London. Stay tuned.

SMD, who played NYC not so long ago, do have non-Whorl dates as well, including Warm Up at Long Island City's MoMA PS1 on August 2 (tickets). All dates are listed, along with the album trailer, below...