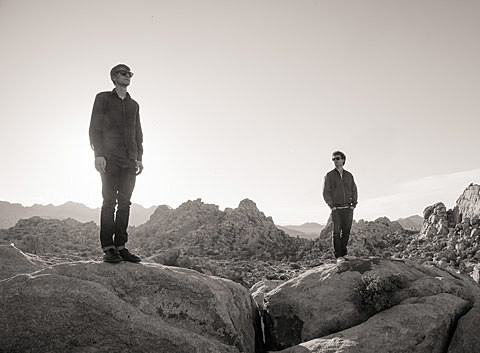 As mentioned, Simian Mobile Disco will release their new album, Whorl, on Tuesday (9/9) via ANTI. The record was recorded live without laptops, and is a bit more proggy and less focused on club bangers than what SMD have done before. You may have already heard "Tangents" from the album and now you can check out the pulsing, slow-building "Nazard" which makes its premiere in this post via a trippy video. Watch that below.

The video actually gives you an idea of the visual element to Simian Mobile Disco's upcoming Whorl tour where they'll be playing the album in full much the same way the record was made. That tour hits NYC on September 21 at Music Hall of Williamsburg. Tickets are still available.

While getting ready for Whorl's release and the upcoming tour, Simian Mobile Disco were nice enough to answer a few questions via email. They talk Whorl, what happens when something goes wrong with delicate equipment, and what's up next. Read it, and check out the Nazard video, below...

The new album is very different from anything you've done before -- was something like this something you had wanted to do for a while? Does it function as a palate cleanser of sorts, not aiming for big clubby singles?
It doesn't feel completely different to us -- we get asked this about every album we've done, and while to people who listen to our records it might seem like each is a jump in style, from our point of view it's more like a steady evolution. But yes we've been planning it for a while -- it was the next natural step really.

You're playing Whorl pretty much as it was made -- does that make for more of a challenge as a live performer? Does improvisation play into things?
Well, in some ways it makes it easier because the process is the same, so you're repeating what you did when you made the music, so each rehearsal/recording/live show allows you to get better and better at playing it. Rather than the old way we used to work, which was to write the music, record an album and then figure out how to play it in the most "live" way possible. There definitely is a bigger degree of improvisation now.

Gear-wise -- Is it a completely different setup than what you normally use?
Not completely - essentially we've done away with the computer, the iPad controllers, the 909, and the rack mounted synths and effects we had, to strip it down to just one modular synth and one hardware sequencer each. We still have a mixing desk of course, and a couple of effects pedals but that's it.

How delicate is the equipment? Do you have a contingency plan, backups?
Some of it is quite delicate - but because of the modular nature, if one module breaks it's not too hard to replace - or even just play without it in some cases.

Can you talk a little about the light show for this tour as seen in the "Nazard" video?
As we've been evolving the music, the production has also evolved - we've been moving further away from "big" light shows - our last tour was a pretty minimal set up, and for this tour we've got a brand new projection based one. It's based around a lot of video imagery of nature fed through an oscilloscope, which really distorts and breaks the imagery up. It's pretty psychedelic.

What should audiences know about this show beforehand?
Well we're billing it as "SMD performing Whorl" -- the reason being is that because we've got a brand new set up, it's not possible to play much of our old music on the gear, so it is a performance of Whorl, the album. Having said that we are trying to work out some of our old bits, and we've been closing our sets with a couple of old tunes -- they sound quite different to the album versions because of the new gear of course.

Has it gotten too easy to make music/records? Is there a place for iPad apps?
There's definitely a place for iPad apps - we were using them all the way through the last live tour, and they can be very flexible and useful. We're certainly not analogue purists, all kinds of kit has it's place, this project is more about imposing limitations on ourselves to force us to be creative.

You were in NYC not too long ago for PS 1 Warm Up where you played with Charingit Singh -- did you get a chance to talk to him, quiz him about his gear, etc?
We didn't really I'm afraid... his show was great though. His set up is 808, 303 and Jupiter over the top.

Simian Mobile Disco rarely do the same thing twice...have you thought at all about what might be next (I do realize I'm asking this before Whorl is even out).
Yeah we're not quite sure yet... the process of recording Whorl was so much fun we'd really like to do it again. Maybe back in the desert, maybe some other outdoor location. We're going to be working on a few new collaborations for [SMD's 12" single series] Delicacies next year, and we've just announced that we're curating XOYO's residency series in London for Oct-Dec, so that's going to keep us pretty busy!