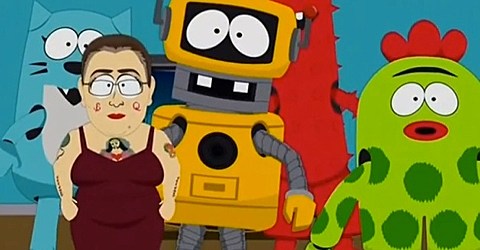 Their feud hit fever pitch when Sinead penned an open letter to Miley following her erratic behaviour including a controversial MTV VMAs performance which saw her twerking semi-naked and appearing naked in her Wrecking Ball video.

And in [Wednesday's (11/6) South Park] episode, Sinead is called upon to help children's entertainers Yo Gabba Gabba persuade Foofa to stop her raunchy self-destructive behaviour.

The parallels don't stop there - Foofa is determined to show her more adult side and is planning a saucy MTV VMAs performance.

Check out a clip from the episode below.

She played the hits from her 1990 blockbuster "I Do Not Want What I Haven't Got" -- "Nothing Compares 2 U," which grew from a simple acoustic-guitar-and-piano arrangement, and a hard-charging "The Emperor's New Clothes," which had O'Connor grinning when she spotted audience members pogoing off to the side -- plus a ferocious "Jackie" from 1987's "The Lion and the Cobra," but this was no nostalgia trip.

O'Connor and her band transformed "Thank You for Hearing Me," from 1994's "Universal Mother," into a kind of rave-up hymn, one that elicited a standing ovation at the end. But the bulk of the show came from 2012's "How About I Be Me (and You Be You)?", which feels like a natural follow-up to "I Do Not Want ..." after her explorations of religious music, reggae and traditional tunes. These were songs raising the hairs on the backs of concertgoers' necks: from the harrowing junkie's pleas of "Reason with Me" to the raucous "The Wolf Is Getting Married" to the withering closing hymn "V.I.P.," which says more about celebrity than any of her open letters to Cyrus.

And since we're talking about it, it'd be wrong not to give Brooklyn fair warning that Miley Cyrus will be returning to Barclays Center on April 5, the same place her VMAs performance gave us everything from Halloween costume ideas to the need to explain to our moms what twerking is. Tickets to that show go on sale Saturday, 11/16 at 10 AM.