DOWNLOAD: Knife/Heartbeats [Grizzly Bear vs. The Knife by PARRKA] (MP3) 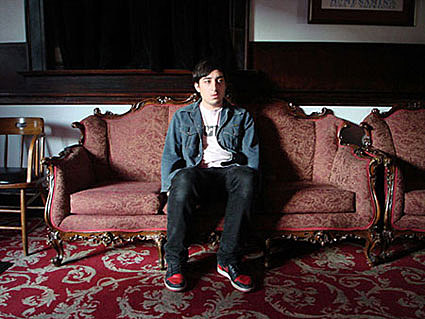 I have guests on my Sirius show all the time, but I'm just now warming up to the idea of having musicians I'm fans of in the studio with me. A few weeks ago Jared from Voxtrot did the show. This week I had Edward Droste (rhymes with toasty) from Grizzly Bear.

Ed, not to be confused with the founder of Hooters, pretty much picked all the music. We also played a bunch of Grizzly Bear and Grizzly Bear-related tracks like the song Ed sings on from the new Dntel album (out April 24th on Sub Pop), and an unnamed track written and performed by Ed's great aunt Marla. Ed titled the song "Mr. Forbes". Grizzly Bear titled it "Marla" when they expanded it, recorded it, and put it on their their fantabulous new/old album Yellow House (out since September 5, 2006 on Warp).

Who should I invite next? Ed's playlist (and a few more MP3s) below...

2: Knife (Girl Talk Remix) by Grizzly Bear
3: One in a Million by Aaliyah
4: Jolly Jolly Jolly Ego by The Dirty Projectors
5: Heartbeats (OneMusic Session) by The Knife

6: Leyendecker by Battles
7: Listen Up! (MSTRKRFT remix) by The Gossip
8: Rock On by Jackson & His Computer Band
9: Oozing Emotion by The Chap

17: Union Hall by Foreign Born
18: I Talk to the Wind by Giles, Giles & Fripp
19: I Keep Everything by Lansing-Dreiden
20: Hurtin' For Certain by Russian Futurists

Check out the cooking story featuring Grizzly Bear in the new issue of Time Out.

Grizzly Bear is playing Central Park Summerstage with the Decemberists on July 16th, 2007.