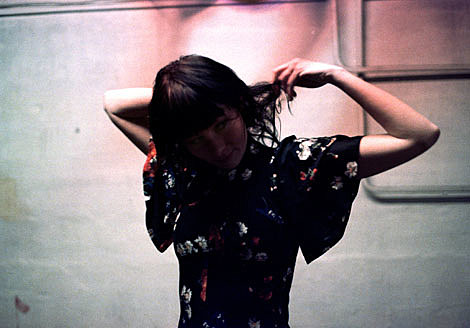 Norwegian electro-pop singer Sissy Wish is back in New York this week with two shows at Pianos: tonight (7/20) with Cincinnati's Slow Claw and locals Ghost Robot Ninja Bear, and on Wednesday (7/22) with The Grates. Both shows, Sissy Wish is on first. There may be a free show tomorrow as well at Bell House but that is still being sorted out.

It was almost a year ago exactly that Sissy Wish (real name Siri Ålberg) was in town. Her 2007 album, Beauties Never Die, has been available digitally since last year but is finally getting an official U.S. release on September 22. Pitchfork gave it an 8.0 in April:

The pseudonym may initially evoke images of cardigan-clad musicians strumming playground-set songs, but Ålberg's music is anything but twee and naïve. Rather, the name Sissy Wish implies a combination of playfulness and wistfulness-- two qualities in good supply on Ålberg's third full-length. Originally released in Norway in 2007 and finally getting a U.S. release this spring, Beauties Never Die balances maturity and wonder as it takes a hard left turn away from the guitar-driven rock of the first two Sissy Wish albums. Instead, Ålberg and producer Jørgen Træn toy with computers, synths, and a few live instruments to animate these 10 inventive, diverse tracks. As such, the album shares some similarities with recent efforts by fellow Scandinavian dancing queens Annie and Sally Shapiro, but it sounds as though Ålberg has arrived at this new sound not through a well-stocked record collection or a thorough knowledge of pop history (although one expects she has both), but by giving full rein to all her personality quirks and musical curiosities.

You can download her single "Dwts" at the top of this post and you can stream the whole thing at Afternoon Records' website. If you don't catch her this week, Sissy Wish will be back in the States this fall. All upcoming 2009 dates and a video after the jump...