Eric Swensen (left) at the Independent foundry in 1983 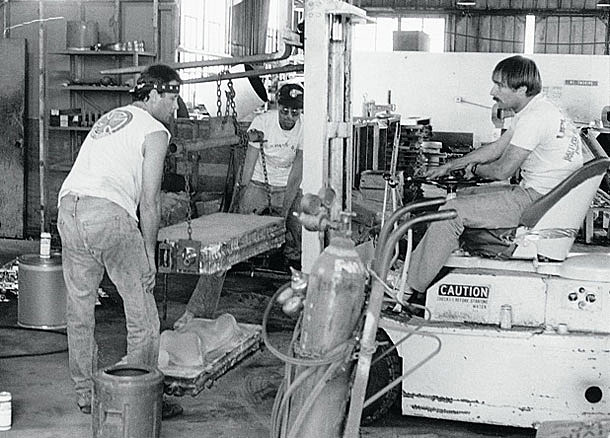 The man who ended his life in front of the Mission Police Station on Monday was a skateboarding icon and co-founder of San Francisco-based Thrasher magazine.

Skaters worldwide are mourning the loss of Eric Swenson, 64, of Potrero Hill, whose local manufacturing and publishing ventures helped launch a massive and lasting subculture.

Swenson shot himself around 8:30 a.m. without going inside the police station or talking to any officers. Loved ones believe the longtime San Franciscan's struggle with a debilitating motorcycle injury led to the suicide.

A "very private person," Swenson may have chosen the police station to end his life in order to spare his loved ones from finding him, said Gwynn Vitello, Thrasher's publisher and wife of Swenson's business partner, the late Fausto Vitello. - [SF Examiner]

If you grew up like me, then you probably took in your share of Thrasher magazines and skated on Independent Trucks as well. Swensen co-founded both, as well as both Juxtapoz and Slap magazines as part of his High Speed Productions Inc. magazine company. Swenson left behind a wife and daughter in the wake of his suicide. - BBG