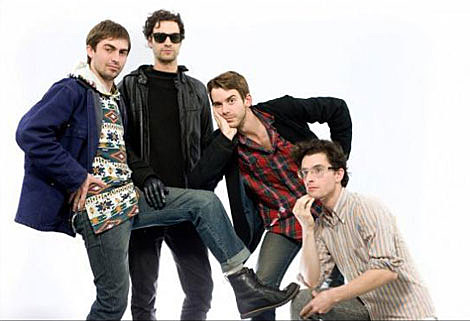 Forward-thinking group Skeletons are a frequent live presence around NYC, but record-wise, they've been quiet since the release of their 2008 LP, Money. In recent months, Skeletons have played out as the expanded Skeletons Big Band, switched their core lineup, and continued to put on great shows. In the spirit of curiosity, we e-mailed guitarist Jason McMahon for an update on their ongoing projects. He said,

So, Skeletons, eh? Due to the inevitable departure of long-time band member Tony Lowe, Skeletons is changing. In the midst of mixing and mastering at least two brand massive new albums worth of material from the last two years, including the promised concept PEOPLE (an album about specific people), as well as recordings of the 16-piece Big Band, we're also now rehearsing with a new organ player (Mike Gallope, a friend from Oberlin and member of Starring) and a new bass player (Pete Vogl, from Bow Ribbons). I expect there to be a new album coming out on Tomlab this Summer or Fall, and that will be PEOPLE.

We're playing on March 27th at the SILENT BARN, a venue we founded in 2005 and haven't been to in years, with sister bands Zs (of which Tony Lowe is now a member), and Extra Life (whose leader Charlie Looker used to be in Zs). It's all very incestuous. It should be a grand reunion/show down of bands that have so much in common that they're actively differentiable.

The Silent Barn show is also a CD release party for Extra Life whose new album Made Flesh is out March 30 on LOAF. Zs have a new album coming too. It's called "New Slaves" and will be released on May 11th by Social Registry.