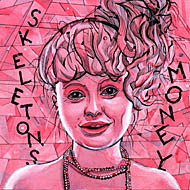 "With a sound that truly verges on unclassifiable, Brooklyn-based freak-niks Skeletons are an anomaly even at the venerable Tomlab label, which stables an entire herd of experimental artists. For a group to stand out as uniquely off center amid labelmates such as Xiu Xiu and Deerhoof is rather remarkable.

The band formerly known as Skeletons and the Girl Faced Boys are playing a show with Extra Life, John Dwyer & Sam Hillmer (mems ohsees, Zs), and John Fell Ryan of Excepter tonight/Friday (1/2) at Death By Audio. The show was moved from its original location of Le Poisson Rouge. Skeletons will also take part in the "Shinkoyo Circus" happening at Roulette from Jan 27 to Jan 29, and in BAM's 'Sounds like Brooklyn' fest with a show at Zebulon on February 12th. Download an MP3 above. Listen to more songs at MySpace. All dates below...