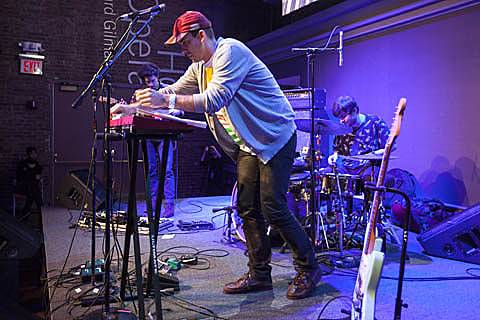 Skeletons play the Michael Schimmel Center for the Arts at Pace University tonight (7/11), opening for Missy Mazzoli & Victoire and part of the River to River Festival. The show starts at 7:30 and is free. From a press release about the show:

This musical portrait of "postclassical queen bee," composer Missy Mazzoli, will feature Mazzoli at the keyboard fronting her internationally beloved ensemble Victoire. Performing songs with her own signature "shimmering, surging, post-Minimalist flow" (Time Out New York), she will be joined by Matt Mehlan with his band Skeletons who Pitchfork calls "an outsize global-a-go-go mélange of unceasing polyrhythms, Afrobeat guitars, free jazz, and Timbaland's approach to kitchen-sink percussion." The concert will feature world premieres by Mehlan and Mazzoli.

Victoire will perform beloved favorites from their repertoire along with newly arranged selections from Mazzoli's acclaimed new opera SONG FROM THE UPROAR with special guest mezzo-soprano Abigail Fischer. Skeletons will perform pieces from the upcoming Skeletons Big Band album "The Bus."

Skeletons' new album, The Bus, will be out September 18 on Shinkoyo and was recorded as the Skeleton$ Big Band, which features members of Little Women, Extra Life, PC Worship, Starring, Tune-Yards, NOMO, and others. The album had an interesting birth, as main Skeleton Matt Mehlan explains:

While finishing the mix of the Skeletons' album "MONEY", Jason [Skeletons' longtime guitarist/collaborator] made the joke / non-joke that we should just scrap the entire album, transcribe and orchestrate all the parts we had just recorded, and re-record them with a 20-piece big band, live, in one room. I laughed at the time AND filled with rage. So much energy had been spent on record, the notion of throwing it away made me sick to my stomach.

About a year or so later, we found ourselves in a tiny room trying to track and overdub parts on the songs for "PEOPLE" - when an email came through asking if we might have an idea to do "something special", over the course of a week, with space and time to work through that big idea at the NYC performance space Roulette. Maybe Jason was right?

It was with great relief that we were able to pause for a moment and consider a new set of ideas. We came back to the "big band" - the almost joke, "jazz" reference, high school band, first time you ever realized you could make an instrument scream feeling - let's get those 20 people in a room and make some noise. Skeletons Big Band.

There's more to the story here. You can stream "Pencilneck" from The Bus below. If you pre-order the album you get an immediate download of the whole album.

If you can't make tonight's show, Skeletons will be playing another free outdoor show on August 8 as part of the Summerscreen series in McCarren Park, playing with Knyf Hyts before a screening of Top Gun. No other Skeletons tour dates at the moment, but meanwhile Summesrscreen actually also happens tonight (7/11).

Skeletons song stream and album tracklist is below.