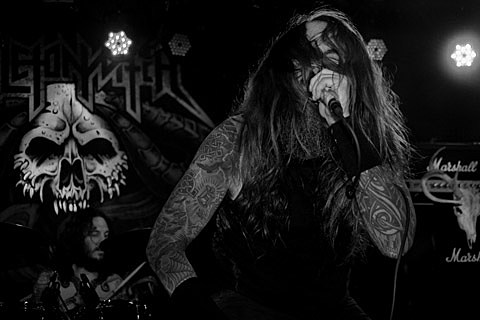 Skeletonwitch is the kind of band that favors classic riffs (in their case, '80s thrash) and a wild live show, so they should be a pretty good fit to team up with a band like Ghost B.C., who also favor classic riffs (in their case, more along the lines of Blue Oyster Cult) and a wild live show. And that's exactly what they'll do on Ghost's previously announced pre-Lollapalooza tour, which hits NYC on July 28 at Music Hall of Williamsburg. Unfortunately, that show is sold out.

Skeletonwitch are preparing to release a new album, Serpents Unleashed, via Prosthetic Records this fall. The record was produced by Converge guitarist Kurt Ballou, who also lent his talents to another bunch of classic riffers this year (Kvelertak).

All dates are listed, along with a live video of "This Horrifying Force (The Desire to Kill)" form 2011's Forever Abomination, below...

Skeletonwitch - "This Horrifying Force (The Desire to Kill)"