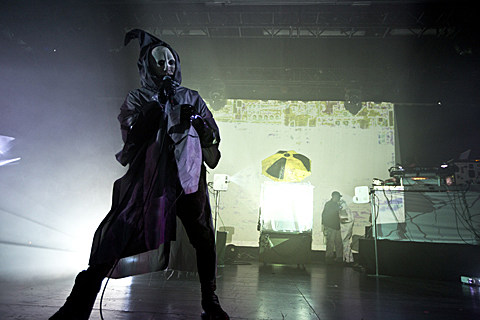 Canadian industrial band Skinny Puppy have invoiced the U.S. government $666,000 in royalties after learning their music was used as a torture device at Guantánamo Bay:

Cevin Key, the band's keyboardist, says the band at first planned to design an album cover based on an invoice for the U.S. government, rather than sending a physical invoice. But after learning that the government had allegedly used their music without permission, Key says the band was told it could bring a suit against the Department of Defense.

"We sent them an invoice for our musical services considering they had gone ahead and used our music without our knowledge and used it as an actual weapon against somebody," Key told CTV's Kevin Newman Live.

And Key said band members were "offended" to learn that their music was played in the notorious prison to "inflict damage" on detainees.

"I wouldn't want to be subjected to any overly loud music for six to 12 hours at a time without a break," he said.

Key says a former Guantanamo Bay guard and fan of the band contacted the musicians to let them know their music was being used at the detention centre. - [CTV]

Other music reportedly used in Guantánamo Bay as torture include works by Metallica, Rage Against The Machine, Queen, Eminem and, apparently, David Gray. Skinny Puppy were just in NYC on tour with fellow Canadian industrialists Front Line Assembly.