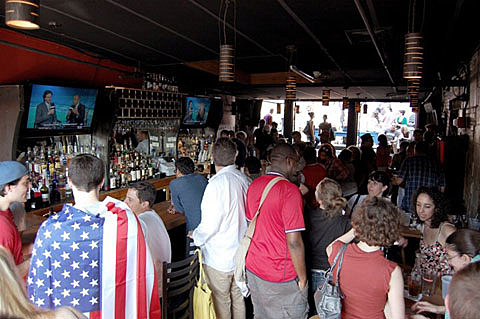 Jack "Skippy" McFadden recently controversially parted ways with Union Hall and The Bell House where he was the main talent buyer (booker) since both clubs opened. Well, not only didn't it take long for Skippy to get another job, he'll be working just a few blocks from both of his old rooms at Park Slope's new Rock Shop. The Bowery-affiliated club (which is not part of Bowery Presents) has a show capacity of 120. Jack says "it looks and sounds like a mini Mercury Lounge, but with that new car smell. High ceilings, great sightlines, a very cool and welcoming place for bands and fans alike."

Skippy will be the exclusive booker of the new venue (which I guess means no Diane). He'll also be bringing bigger shows to other clubs he's partnering with around the city. He hasn't named them, but he'll basically be freelance-booking shows that would have fit into the Bell House, into other venues.

The Rock Shop schedule hasn't been announced yet, but the first shows are: July 7, 9, 10, 13-17, and there will be a "grand opening" on August 2nd. The August 2nd artist won't be announced until that day. Check BrooklynVegan.com around noon that day to find out who it is.