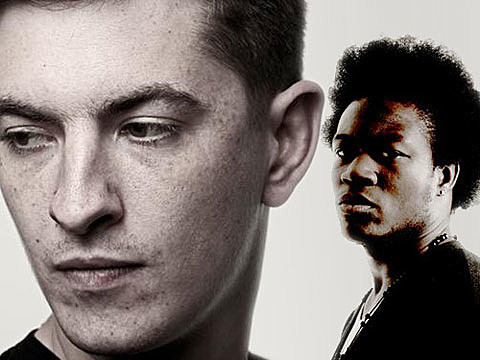 Quietus: A lot of people would say with the Skrillex stuff, that it's damaging to dubstep, it's perverting the sound.

Skream: But what are we gonna do, form a united front against Skrillex? Honestly, it's pathetic, I think, it's ridiculous. Either listen to it or don't listen to it. There's still nights playing the stuff those people want to hear. It's just bitchiness, it really is. You haven't got to like his music, you don't particularly have to like him, but there's no reason you can't like what he's done - he's smashed it. He's up for five Grammys. He must be doing something right, you know what I mean?

I think it hurts a lot of people over here because it's a UK sound, but it's been someone with influences outside the original sound that has made it a lot bigger. The bad side of that is that a lot of people will just say 'dubstep equals Skrillex'.

But in all honesty it genuinely doesn't bother me. I like the music he makes. People will fucking burn me for saying that [laughs]. There'll be effigies out in the fucking street! It just is what it is man, you've just got to keep yourself moving. The fact that dubstep, the word - you know I hate saying the word, I love what it is but I just hear it so much now. But even though it's so big now, that means that everybody else is earning a bit more money. Even if you're playing the deepest deepest sound, you're still earning that little bit more money because you're playing dubstep. Whether you want to admit it or not, you are.

Skream is a little more lenient with the Skrillex type stuff than James Blake who called it a "direct misrepresentation of the sound" and Rusko, who said, "brostep is sort of my fault but now I've started to hate it." Rusko told SPIN that his new album, due out in January, is "completely a reaction to the masculine, dance-floor orientated, distorted mess that is the current state of dubstep." Skream's collaborator Benga is also working on a new album that is "different to what's going on at the minute," but like Skream, he says, "I'm not bothered. I'm happy that a lot of people like the music." Skream does admit that the dubstep going on at the moment is a "fad" though, and wants to make sure that when it "dies out, he's still standing."

Skream probably still will be standing, but until that fad dies out he'll be embracing it in NYC on February 4 at Terminal 5 when he and Benga open for Skrillex, along with Koan Sound and FlyLo associate Tokimonsta . Tickets will probably sell right out Thursday (12/22) at noon. They're on AmEx presale now.

(Speaking of Tokimonsta, she recently remixed Eight and a Half, the new project of Broken Social Scene's Justin Peroff and members of The Stills who play two NYC shows in February - both on sale this week.)

If the Terminal 5 show is exactly the kind of electronic show you don't want to be at (I wouldn't blame you), Tycho, Oneohtrix Point Never, and Beacon play the same day (2/4) at MHOW and tickets just went on sale.

Skrillex, who is also one of the many electro artists playing a cruise ship in January, also plays Roseland Ballroom on 2/3 (one day before Terminal 5) with Zane Lowe and Spank Rock who also recently toured with Ke$ha, Spank Rock has also opened for Bjork, and who toured with Big Freedia and friends this year too. From Iceland to Bushwick to mainstream pop to brostep, everyone loves Spank Rock. UPDATE: Skrillex plays Webster Hall while he's here too.

And speaking of James Blake, his new video for his cover of Joni Mitchell's "A Case of You" which stars Rebecca Hall is below.

Also best of luck to James Blake collaborator Bon Iver who is going up against Skrillex for "Best New Artist" in the Grammys (you know, because Bon Iver was a new artist this year), not that Justin Vernon will care if he loses anyway (as he shouldn't).

James Blake video and a ton of Rusko tour dates (including New Year's Eve in Chicago), below...