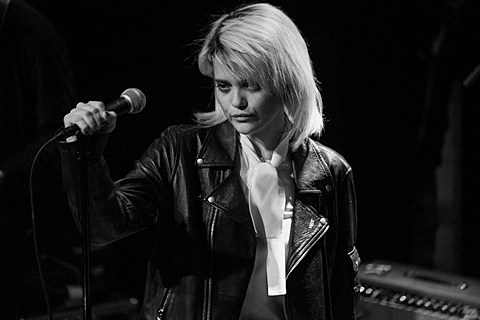 NYC pop singer Sky Ferreira has international festival appearances coming up this summer in Canada, Australia and Japan, but before all that she'll play a hometown show on July 9 at Music Hall of Williamsburg. The show is a benefit for the David Lynch Foundation which "funds Transcendental Meditation (TM) programs for at-risk students; veterans with PTSD; women who are survivors of domestic violence; American Indians suffering from diabetes; the homeless and incarcerated." Ladies Night, VIto Roccoforte (of The Rapture), and special guests will be DJing. Tickets go on sale Wednesday (6/18) at noon. All dates, including a previously discussed free show in Montauk, are listed below.

In other news, you may have heard by now that Sky was recently interviewed on a talk show in Brazil (home of the 2014 World Cup) where the interview didn't exactly pick the best question. Huffington Post reports:

Everything seemed to be going fine until the Gentili asked, "Do you think everybody loves your work because of the music or also because of the cover ... and because of the tits." (Yes, the album artwork for "Night Time, My Time" features one of Ferreira's breasts.) The singer kept her cool though and answered, "I'm pretty sure it's because of my work, but it helps if you're a pervert."

Watch the video of that interview, with the list of dates, below...