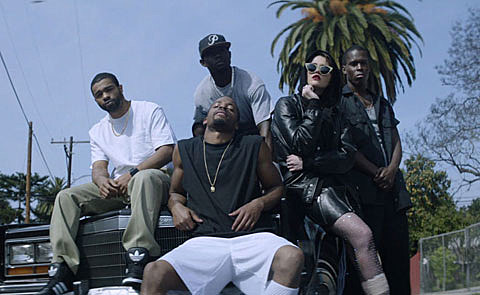 The above picture comes from Sky Ferreira's new controversial video for "I Blame Myself", which is part music video, part an ad for what she is wearing, and part racist according to some. Sky defends herself in a Facebook letter that you can read under the video below...

Thank you so much for the love & support of the video. It's something that means a lot to me. I've never seen such a big response from my fans before

I've been reading some of the responses and I had a few thoughts:

Some people are accusing of being racist. I usually do not need to feel the need to explain myself(which I'm not) but I DO feel the need to share my thoughts on the situation. Nothing upsets me more than being called racist because that is one of the most hateful things anyone can be. Not only do I find it insulting towards myself but I also feel insulted for the actors & dancers & my family in the video. No, I did not use black back up dancers as "props". I never have and never will look at any human being as a prop. That's disgusting. It's also an idea that has never crossed my mind,which is what I find questionable of the people telling me that I did so. Dancers are objects?!?!?! How dare you! Dancers make things come to life. If they were white would they be considered "props"? I auditioned a bunch of dancers, all races & my dancers were the best ones. I know that you have to be socially aware & mindful of others but when I look at this video I don't see race as a issue. Stop trying to search for something that isn't there. Comments like "rich little white girl exploiting the black people & the ghetto"...I never exploited anyone & I don't use people in any shape or form. My brother is half black. My cousins are black. My family is Latina & Native American. Some of my family is in the video. I wasn't raised in a "white" house hold & I'm not little & I have financially supported myself since I was 15 years old. I'm a woman, not a fucking little girl. Because I have pale skin & green eyes doesn't mean I was raised in Beverly Hills and have Swedish film investor parents or whatever some have created in their minds. Would you feel more at ease if I danced with a bunch blonde white boys at a mall? Should I consciously only cast white dancers for now on? If I'm racist does that mean you're pro-segregation?! I'm from LA & shot the video there. I referenced 90s hip hop videos and Michael Jackson because both of those things inspire me & played a big part of my childhood. The only thing I'm sorry for is if this post seems to come off self defensive,which it isn't meant to be...but I had to share these thoughts because it drove me up the wall. Don't demean the actors & dancers in the video. They are more well spoken & aware than you and I will ever be. Please do research before you make such shitty accusations about people. Anyways...Thank you SSENSE & Atom Factory Management & Grant Singer for making this video happen. We have been trying to make it for a while & I'm so glad I get to share it with the world now <3333333< p>

What do you think?