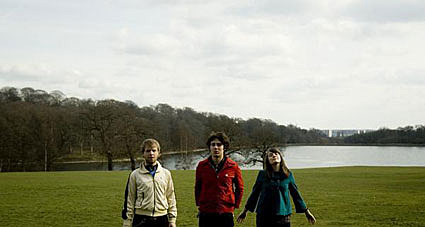 Don't miss show(s) of next week: The American live debut of Leeds, UK group Sky Larkin, who are one of 2008's real hopefuls (to me at least). Not really part of any scene that would get them on the cover of NME, Sky Larkin are pretty straight-forward melodic guitar pop with a charismatic frontperson (Katie Harkin) and two ace singles under their belt. A bit slow in released material (they've been together since 2005), but the floodgates are about to open as the band have just finished recording their debut album in Seattle with producer John Goodmanson. They're here in New York to shoot a video and are thankfully playing two shows when not in front of the camera: Wednesday (8/13) at Pianos and Thursday (8/14) at Union Hall (tix). 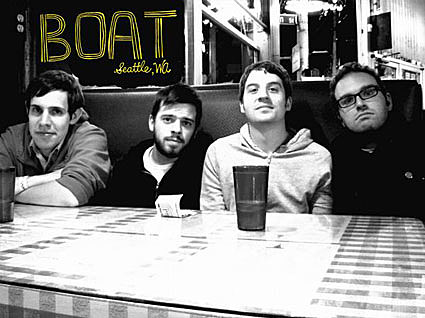 Seattle's sloppy, poppy BOAT are making a rare trek to the East Coast for a tour they've dubbed "We Jam Super Econo and a Bit Cramped." Signed to one of my favorite American labels, Magic Marker Records (Tullycraft, The Bats, The Owls), BOAT have a sort of classic American indie rock sound (think Pavement or Butterglory), with super-catchy songs and a nice sense of humor. I highly recommend last year's Let's Drag Our Feet, and hopefully the band will be bringing lots of copies of their new baseball-themed single "Topps" that comes with trading cards and stiff, crunchy bubblegum. Along for the ride will be similar-minded Philly band Creeping Weeds. The tour hits Cake Shop on August 17 and Union Hall (with the great My Teenage Stride as well) on August 20 (tix).

This weekend is all about All Points West (well, Friday and Saturday...are people going on Sunday?), but there are some worthy shows that aren't part of the megafestival.

This Friday's entry in the Seaport Music Festival is a good one: Cass McCombs, who didn't get as much attention as he probably deserved for last year's fine Dropping the Writ; and Miles Benjamin Anthony Robinson who might be getting more attention than he really needs right now, like him as I do.

Saturday (8/9) brings the Vice/Colt 45 Tour with Cheeseburger to Glasslands Gallery, the last date on the tour. Has there been a more perfect marriage of rock to tour sponsors? I've never been good at math but Cheeseburger + free malt liquor + last night of the tour = mayhem. It's also free with an RSVP but, you know how these things work, get there early or don't get in. 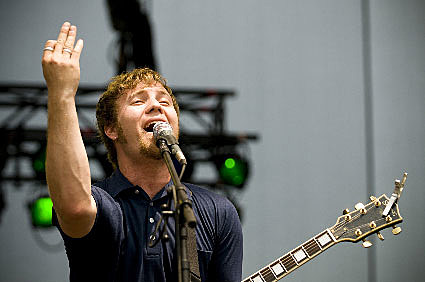 Also on Saturday at Union Hall is "Endless Shovels", a "Rogue Wave Tribute Band" which seem like an odd thing to have when Rogue Wave are actually in town the next day playing APW. Hmm... Tickets are on sale.

And if you are going to APW on Sunday, be sure to get there early to catch supertalented Slowdive/Mojave 3 guitarist Neil Halstead (check out our interview) who'll be there supporting his brand-new, very good 2nd solo album, Oh Mighty Engine. He's also playing Hamptons celeb hangout The Surf Lodge on Saturday if you're up that way, as well as opening for Jack Johnson on a few dates before continuing on his own. All dates and videos below...