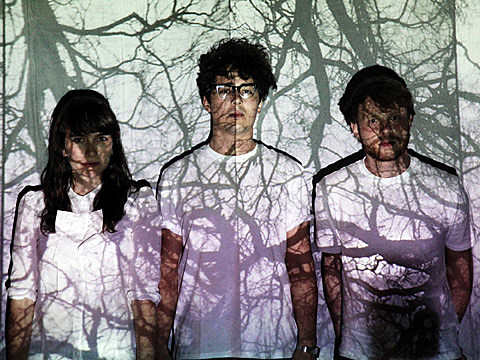 Sky Larkin will be over from the UK this month for a North American tour which starts in Vancouver on October 12 -- the same day their teriffic new album, Kaleide, gets its American release. The band will be on the road with Blood Red Shoes, and the tour hits NYC during CMJ, specific dates still to be determined. Maybe you saw Sky Larkin last year during CMJ at one of the Brooklyn Vegan day parties? They're a powerhouse live (you might even call them a Power Trio) and I'm looking forward to hearing the new record on stage.

For Kaleide, the Leeds trio reunited with Seattle-based producer John Goodmason with whom they made last year's The Golden Spike. It's a stronger, more confident record all-around that at times reminds me of a harder rocking Blake Babies. You can listen to the whole thing via the streaming player at the bottom of this post.

Meanwhile, one of Kaleide's standout tracks, "Year Dot," is coming out as a single/EP next month with a host of remixes, including one by Spirit/Spine which you can download at the top of this post. Also up there is their deconstructed cover of the Heart classic "Barracuda" and you can watch a making of video about it at the bottom of this post.

That video, the streaming album player and all announced North American tour dates are below.