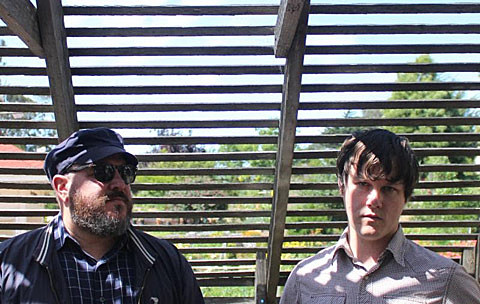 Skygreen Leopards have been part of San Francisco's psych scene since the early '00s, with the core duo of Glenn Donaldson and Donovan Quinn with various expanding and contracting bandmates over the years. The music has remained consistent, however, pastoral folk pop indebted to the city's mid-'60s flower-power scene. The band just released Family Crimes over the summer on Woodsist and you can watch the video for "Crying Green and Purple" below and check out the whole thing on Spotify.

The band are wrapping up a short tour on Thursday (9/18) at NYC's Baby's All Right. They play with Lower Plenty and Chicago's J Fernandez and tickets are on sale.

The Baby's show is the start of a tour for J Fernandez whose new EP, Memorize Now, will be out October 14 via Atelier Ciseaux. His brand of crystalline guitar pop is, at times, not to far removed from new wavers like The Monochrome Set. Check out the pleasantly foppy "Cosmic Was" below. J will be back in NYC next month for CMJ too so look out for him then. All confirmed dates are listed, along with videos and streams from Skygreen Leopards and J Ferandez, below...