photo: Jake from MoBo at Vitus in February (more by Mimi Hong) 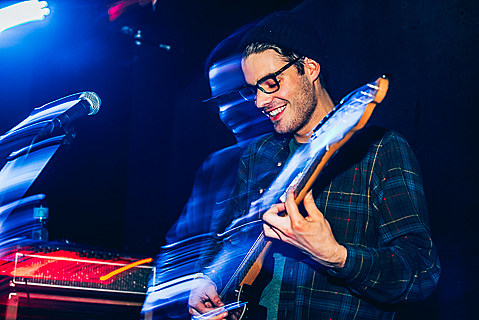 Modern Baseball co-frontman Jake Ewald also has a solo project called Slaughter Beach, Dog, which he's going on a short Northeast tour with this week. The tour is with Broken Beak and comes to NYC this Thursday (4/23) at Shea Stadium with Crying and Trace Mountains (Dave from LVL UP). Tickets for that show are on sale now. All dates are listed below.

Jake recorded, mixed, mastered and self-released his first Slaughter Beach, Dog EP, Dawg, late last year and just put out the record on 7" vinyl. You can stream the whole thing below.

Meanwhile, his tourmate Broken Beak is the musical project of Philly artist Beau Brynes who also does artwork for bands, including album art for Weatherbox, Have Mercy and Soda Bomb. Broken Beak's latest release, Old Evil, was produced, mixed and mastered by Jake, and you can stream that below.

The full Modern Baseball band will be back in the NYC-area for NJ's Skate & Surf fest in May, and on their tour with Say Anything, Cymbals Eat Guitars and Hard Girls, which hits NJ and NYC in July (tickets).

LVL UP also have a bunch of dates coming up, including NYU's Strawberry Fest with Cloud Nothings; a tour with Glocca Morra and Greys; and a tour with Basement, Adventures and Palehound.