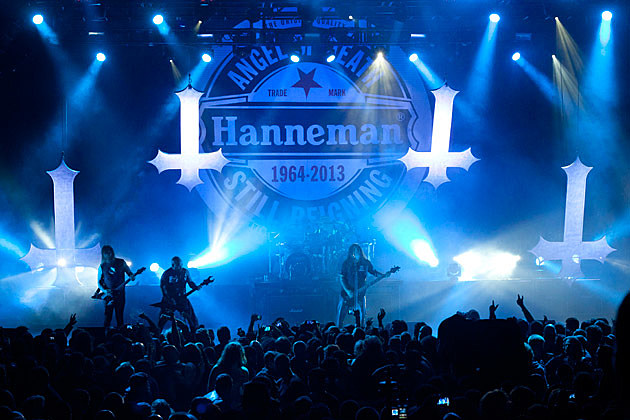 The Slayer, Exodus, and Suicidal Tendencies showcase that brought together the thrash luminaries for a few dates in May (including Rock on the Range) was apparently just a taste of things to come. In the fall, the three will reprise that bill in a North American tour presented by Scion. The tour begins on November 12 in Oakland, California and ends on December 5 in Detroit, Michigan. On November 29, the speedy triumvirate will hit Montclair, New Jersey's Wellmont Theatre. Slayer Fan Club members will be able to purchase tickets on Wednesday, June 25 at 10 AM EST. Sales for tickets for the general public begin on Friday, June 27 at 10 AM EST.

UPDATE: There's also an Invisible Oranges presale for all dates on the tour beginning Thursday (6/26) at 10 AM local time. PRESALE PASSWORD HERE.

This incarnation of Slayer will include Kerry King, Tom Araya, guitarist Gary Holt, and drummer Paul Bostaph. Exodus, too, just underwent a membership shift, welcoming singer Steve "Zetro" Souza back into the fold. Said Souza, "For my first tour back with Exodus, I'm beyond excited to be on the road with my brothers in true thrash metal! I'm also looking forward to meeting and hanging out with all of the fans on this heavy as hell tour." All three bands have been working on new material. Slayer have their eyes set on 2015, Exodus's material will come a little sooner at near the end of 2014, and Suicidal Tendencies released 13 a little over a year ago.

Slayer is currently on a world tour, but will return to the States before the Exodus/Suicidal Tendencies tour in September for Riot Fest Chicago and Denver. Exodus will play Heavy Montréal 2014, along with dates in Europe and Brazil. And Suicidal Tendencies have two Asian fests on their schedule.

All dates are listed with ticket links and live videos of the three, below...