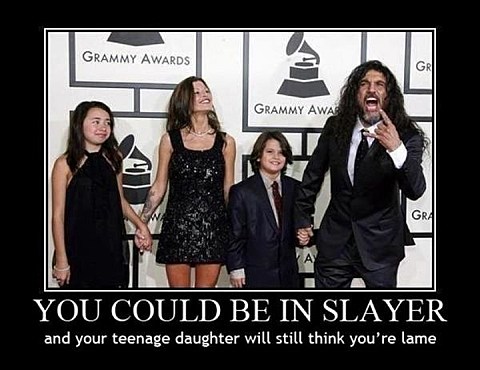 Slayer's new album has been met with a few shrugs this year, and its newest critic is Slayer frontman Tom Araya's daughter Ariel, who gives it the review of: "Eh."

We learned about this from a new post by Ariel on Reddit. You might remember that the above picture of the Araya family (from the 2008 Grammys) took the internet by storm, and left Tom with charges of lameness that may or may not have been caused by Ariel's mortified look in the picture. She defends him:

I was 11 at the time when this picture was taken. Having flash bulbs in your face and 30+ people yelling "LOOK AT ME" can be a little intimidating. I love the old Slayer. Some of the newer stuff is eh. My dad misses being home. He isn't lame. He's been the best dad he can be with our circumstances.

So the record is now straight; Tom is a great dad and old Slayer rules... just don't ask her about the new stuff. (She later clarified, "Don't get me wrong the new stuff is still good music I just prefer the older stuff. You can hear the bass in it compared to now," but the "eh" quote is funnier.)

Speaking of children and metal news, Mastodon's Brent Hinds, who can generally be found doing funny things, is featured in a new promo video for Orange Amps giving a head tattoo to a child. Hail Satan. You can watch that below.

Mastodon are in the midst of their NYC-area run with Judas Priest. It kicked off at Huntington, NY's Paramount last night (11/5), returns there tonight (11/6), and then hits Newark's Prudential Center on Saturday (11/7) (tickets).