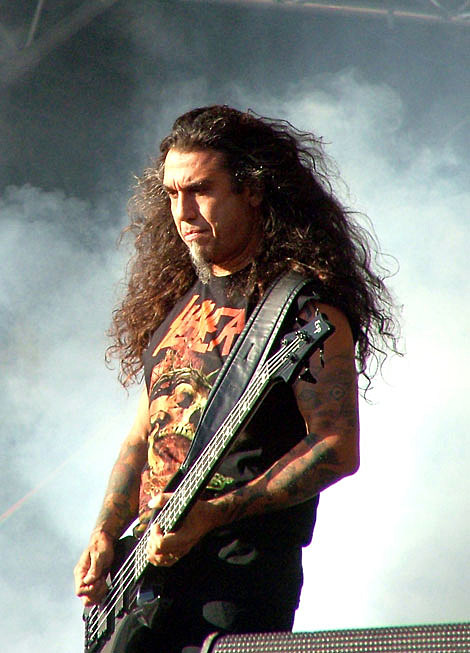 "Tom gave various medical treatments more than a fair shot," said Slayer's manager Rick Sales, "but they just haven't handled the problem, so he's biting the bullet and is scheduled for back surgery at the end of this month."

This difficult decision made by the band's bassist/vocalist Tom Araya means the cancellation of Slayer's immediate tour plans that include the American and Canadian Carnage Tour dates that were set to kick off on January 18, as well as the band's UK/European tour scheduled for March and April. Booking agents for both Slayer and Megadeth are already hard at work to see if these dates can be rescheduled, so those holding tickets are asked to sit tight as more info will be announced as progress is made.

The headbanging Araya, known for aggressively swinging his long mane of hair while performing, began experiencing back problems while on the band's Australian/New Zealand/Japanese tour last October. In spite of his rapidly increasing pain and discomfort, he carried on with the tour, but immediately upon returning home saw an orthopedic specialist who diagnosed a Cervical Radiculopathy. The rocker initially did not want to take the major surgery route, so the specialist recommended a series of minimally-invasive procedures. While those procedures have resulted in some improvement, Araya continues to deal with intermittent bouts of severe pain, numbness and muscle spasms. The surgical procedure that Araya will undergo, called an Anterior Cervical Discectomy with Fusion, is a relatively routine practice and the recovery rate is excellent.

Sales added, "As unfortunate as this is for so many people - the Megadeth and Testament camps, the concerts' promoters, and, of course, the fans - Tom's health is the number one priority, and this has to happen."