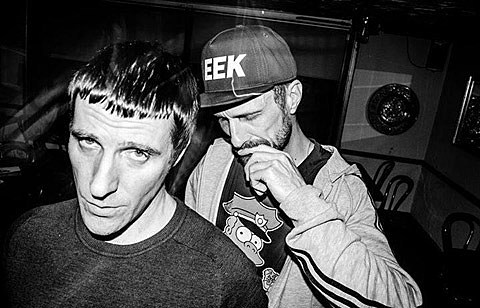 BrooklynVegan is very excited to be presenting the first American show by UK duo Sleaford Mods, which will happen in NYC at The Wick on November 29. Supporting bill is still TBA but tickets are on sale now. Here's what we wrote about the 'Mods earlier this year:

Somewhere between punk, hiphop and spoken word lie UK duo Sleaford Mods. (They are neither mods, nor from Sleaford. They're from Nottingham.) Jason Williamson spews a tapestry of bile over low-tech, muscular backing by Andrew Fearn, the result is somewhere between The Fall, McClusky, Happy Mondays and John Cooper Clark. The pair have been making music for eight years now but really started to get attention with last year's terrific Austerity Dogs and look to go even wider with the just released Divide and Exit. On it Sleaford Mods are in full rebellion mode. Who against? Whadda you got? Like Protomartyr's Joe Casey, Williamson hold equal contempt for the rich, conservatives, liberals, phonies in general, idiots, "jolly fuckers," etc all via a nonstop torrent of brilliantly, hilariously profane lyrics.

You can stream Divide and Exit, as well as previous releases and a few videos and a short Quietus documentary about the band, in this post.

The Wick show is Sleaford Mods' only North American date at the moment but they're on tour in the UK and Europe throughout the fall. All dates are listed, along with videos and streams, below...