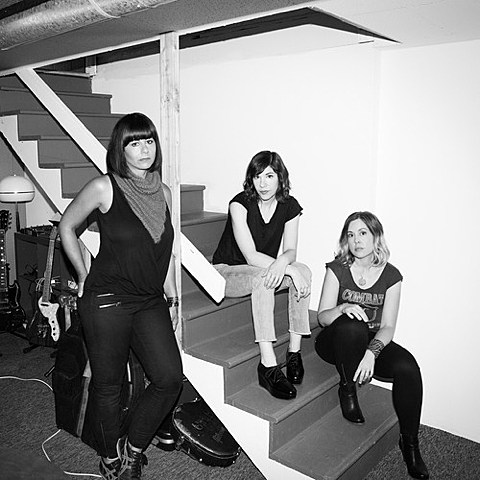 We'll have to wait until 2015 for the reunited Sleater-Kinney to give us a new album and tour, but they'll be making a non-musical appearance this week. Corin Tucker, Carrie Brownstein and Janet Weiss will be on this week's episode of comedian and punk lover Chris Gethard's The Chris Gethard Show. Here's what Geth has to say about it:

This week on TCGS, we are super psyched to welcome SLEATER-KINNEY to TCGS! That's right - this seminal punk/riot grrrl/generally all around bad ass band has reunited and for some reason they've decided to come hang out on the panel of your favorite public access television show. We'll be playing a game with them all night long that you can call in and be a part of... it's called ALL HANDS ON THE BAD ONE, and you don't want to miss it.

Though they won't be playing, the musical guests are also pretty exciting and it's a band that likely owe some of their style to Sleater-Kinney -- Chris Gethard's Don Giovanni labelmates Priests (who played one of the last Death by Audio shows). The show tapes and airs live Wednesday (12/3) at 11 PM EST on Manhattan Neighborhood Network. If you'd like to attend, email zerolaughs@gmail.com.

Meanwhile, Chris will be at tonight's (12/1) edition of Wyatt Cenac's weekly Night Train show at Littlefield (tickets), Chumped's release show at Suburbia on 12/13 (tix at door), and Union Hall on 12/20 (tickets).

Stream Sleater-Kinney's new single and a Priests song below...