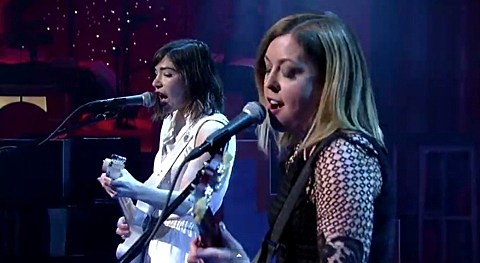 Sleater-Kinney's new album No Cities to Love comes out next week (1/20) via Sub Pop, and they're currently in NYC doing some promotion for it. Last night they played The Late Show with David Letterman, performing "A New Wave" off the new album. If you're wondering who the fourth member of the band is, that's Katie Harkin of UK band Sky Larkin who will be playing guitars and keyboards for their upcoming tour. Watch the video of that performance below.

They'll be hanging around tonight (1/16) to be interviewed by Ilana Glazer and Abbi Jacobson of Broad City on NPR. If you missed it, yesterday a video came out of Andy Samberg, Gerard Way, Ellen Page, Sarah Silverman, Miranda July, J Mascis and other famous people singing the title track of their new album. Check that out here.