Matt Pike of Sleep, on stage with High On Fire (more by Markus Shaffer) 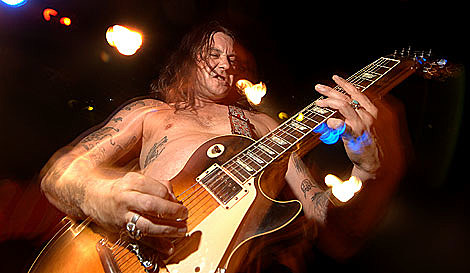 I get my fair share of emails, but lately the number regarding a single issue has trumped all others: the sold-out Sleep show at Brooklyn Masonic Temple on 9/8. Unfortunately, those tickets are completely gone - relegated to the black market (not that I condone...). Luckily though, BrooklynVegan and Osiris Productions are proud to announce a SECOND show at Brooklyn Masonic Temple on September 6th, this time with support from Doomriders and Unearthly Trance! Tickets are on sale.

The show takes place the same day that Young Widows, Helms Alee, and Marching Teeth will take on Cake Shop as part of a BrooklynVegan/1000 Knives event. Tickets are on sale.

It's not the first time that Matt Pike and the boys from Unearthly Trance have shared a stage. It also happened when High On Fire played Music Hall of Williamsburg in late July with Natur.

Current Sleep dates and tons of videos are below...