Sleep Over at Austin Psych Fest 2012 (more by Tim Griffin) 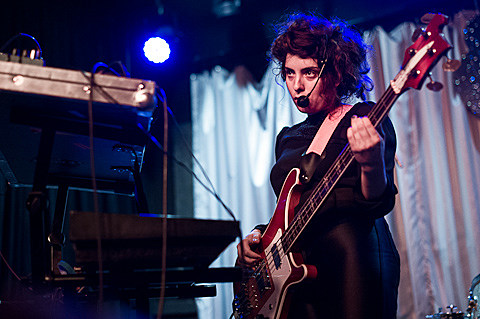 Sleep Over is going on a tour with Memory Tapes which hits NYC for a previously mentioned show on April 14 at Mercury Lounge. TIckets for that show are still available. All dates are listed below.

After that tour wraps up, Sleep Over will play another NYC show a few days later at 285 Kent (4/17) with Prince Rama, Teams, Splash, and a "Special Guest." Tickets for that show are on sale now.

Prince Rama play local shows in NYC a lot, and you can see them even sooner at The Whitney Museum for this weekend's Blues for Smoke festival. They play on Sunday (4/7) with Dapwell, Heems, and Le1f. Meanwhile tonight (4/5), Kool A.D. plays with Mykki Blanco (who was just added to Le1f's Red Bull Music Academy show).

In related news, Pure X, who Sleep Over released a split with back when they were called Pure Ecstasy, have expanded their previously announced tour, and it now includes a third NYC date. In addition to playing the Crossing Brooklyn Ferry festival at BAM on April 27, and their show at Mercury Lounge on May 14 (tickets), Pure X will also play 285 Kent (5/15) the day after the Mercury Lounge show. Tickets for the 285 Kent show are on sale now.

All Sleep Over and Pure X dates are listed, along with a stream of "Romantic Streams" from Sleep Over's 2011 LP, Forever, below...