Sleigh Bells @ The Studio in 2009 (more by Kyle Dean Reinford) 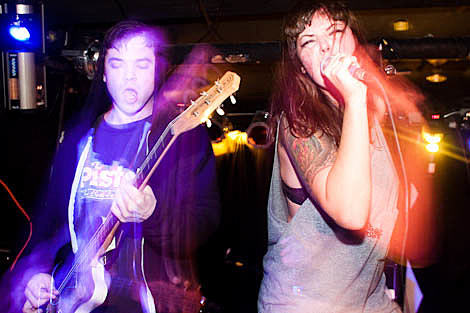 Like Lana Del Rey and Bon Iver before them....

"Sleigh Bells will make their network television debut as the musical guest on Saturday Night Live on Saturday, February 18th, airing on NBC at 11:30 pm EST. The Brooklyn duo will be playing the brand new songs "Comeback Kid" and "End of the Line" from their forthcoming album Reign of Terror, which will be available on February 21st on Mom+Pop Music. The band will be performing on the show hosted by Bridesmaids star and SNL alum Maya Rudolph.

Sleigh Bells' Washington D.C. and Toronto shows, on Feb 16 and Feb 18 respectively, have been rescheduled for late March. All previously purchased tickets will be honored for the rescheduled shows. The new dates and venue details are below.

Sleigh Bells will also appear on the cover of SPIN Magazine's new-look March/April issue, which hits newsstands on February 28th."

Sleigh Bells are currently on tour with Diplo and Liturgy and headline a sold out show at Terminal 5 with Black Bananas on 2/17. All dates are listed below...

* With Diplo and Liturgy
+ With Black Bananas (Jennifer Herrema from RTX)