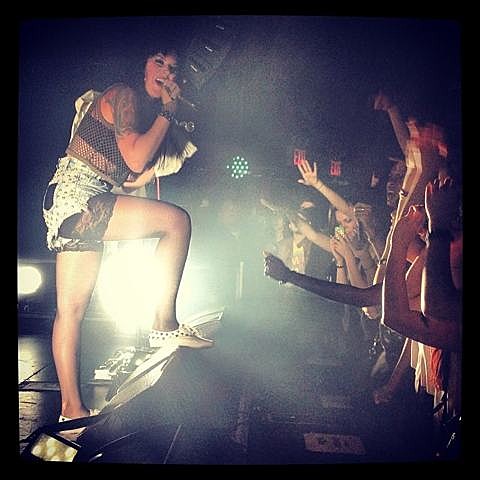 Rage pop duo Sleigh Bells just played a release show in NYC at Le Poisson Rouge on Saturday (10/5) for their new album Bitter Rivals, and they're kicking off their full tour in support of the new record this week. As discussed, the tour culminates with a much larger NYC show happening on November 22 at Terminal 5 with Doldrums and Danny Brown (whose new album, Old, is out now too), and since we last spoke, Sleigh Bells, Danny and Doldrums have added a second date happening at Terminal 5 on November 23. Tickets for the newly-added show go on sale Friday (10/11) at noon, and tickets for the first night (same link) are still available.

Sleigh Bells, whose old song "Rill Rill" is being used in the current iPhone 5c ad, have also made their new album, Bitter Rivals, available for streaming. You can listen to that, along with a stream of the new Danny Brown album, and the updated list of dates, below...

* with Doldrums
+ with Danny Brown