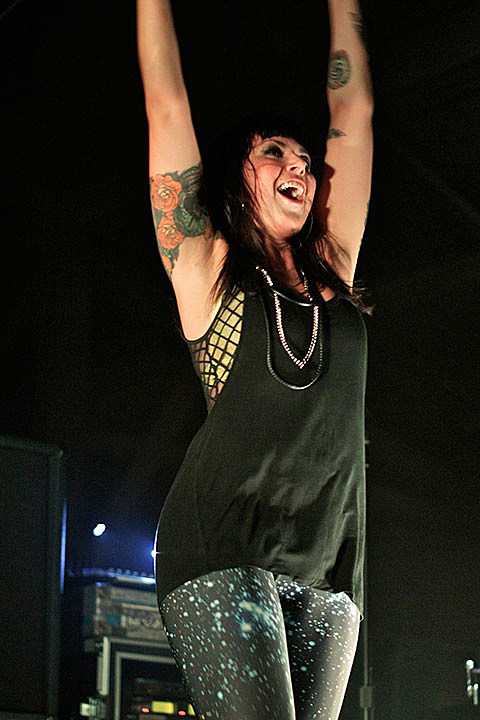 The first 300 kids lined up down the street got in. An aside: the only "Skins"-like moment of the night were the high schoolers behind me doing coke while their girlfriends peed on the sidewalk an hour and a half into the two hour freezing cold wait.

If you got in you'd find yourself awash in day-glo, smoke machines and a strange party that was equal parts rave and small town carnival. There was a rave themed moon-bounce and blacklight-face-paint... neat... Think "dance party themed" Bar Mitzvah with a real big budget.

The cast of the show was there too, they'd come down from an upper level, no drinks in hand, answering the pressing question of the night--whether or not the underage cast would be seen partying. Perhaps they left their drinks upstairs.

The entertainment was decent, including Klever, Drop The Lime, and Kill The Noise. The DJs played throughout the night, hunched over laptops, cranking out house and dubstep. A break in the rave came around 12 when Sleigh Bells came on-stage to play possibly the loudest set the human ear can handle. -[Gawker]

Gawker's review comes from the that Skins party (referred to as the "World's Biggest Eight Grade Dance") which featured Sleigh Bells as the headliner. Most people who RSVPed did not get in (the RSVP list reportedly was in the five figures). Some ended up in Brooklyn instead of Manhattan.

If you were left out in the cold (literally) at the Skins launch party, don't fret. After Sleigh Bells return from a stint in Europe at the tail end of February, the duo will hit the US with CSS for a string of tour dates in early May that will include dates at Webster Hall on May 11th and Music Hall of Williamsburg on May 12th. Tickets for both shows (Webster Hall, MHoW) go on AMEX presale on 1/26 at noon and regular sale 48 hours later. Neon Indian will open the dates that CSS won't, and Mr. Dream is on board for a string of dates including Webster Hall (with CSS).

A recent update to Diplo's Mad Decent blog revealed quite a bit about what Derek Miller of Sleigh Bells (ex-Poison The Well) and Diplo have been up to:

"Derek from sleigh bellz and me have matching florida tattoos and we both are from shitty parts of broward county // & their last album was one of the sickest of '10 .. its soo sick, its gave me a stomach ache .. half lyrnyrd skinnard half bangladesh half man half alligator.. . me and derek and alexis are bros and sis for life. in fact i like sleigh bells so much .. me and switch was in studio in nyc tryin to make tracks with derek and beyonce last week after we played her team their album .. dunno if we gonna manage to finish but was good times." - Diplo

A few things we learn from the above paragraph: First of all, Diplo needs a proofreader (like we can talk) and second, keep your fingers crossed because a Beyonce/Diplo/Switch/Derek Miller collabo track could surface (sounds interesting). While we wait, check out another Derek Miller/Diplo creation - a remix for Sleigh Bells's "Tell Em" (the actual reason for Diplo's blog post) which is downloadable above and streaming below, along side all tour dates.