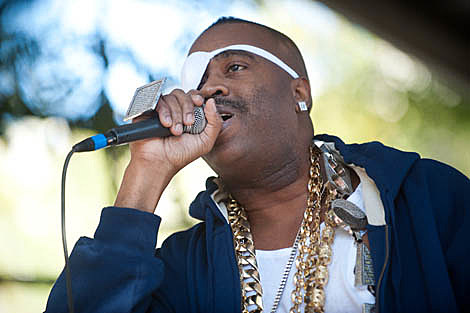 It's been a good day for old school hip hop heads, with that weird Chinese Tupac biopic and the Nas / Juicy J / Pimp C song off the posthumous Pimp C album, but it doesn't stop there. There are some good NYC shows coming up with veterans too:

Slick Rick plays his annual birthday show on January 15 at Brooklyn Bowl. Tickets go on sale Friday (11/20) at 10 AM. He also plays New Year's Eve in Deroit with Whodini, Doug E. Fresh, EPMD and Big Daddy Kane, and has other upcoming shows too.

Raekwon squeezes in a hometown one-off on December 17 at SOB's (tickets). The day before (12/16) at the same venue, Pharoahe Monch & friends will do the same (tickets).

Duck Down celebrates its 20th anniversary with a show on December 3 at BB King's that has Boot Camp Clik, Buckshot, Smif-N-Wessun, Black Moon, Da Beatminerz and O.G.C.. Tickets for that stacked lineup are on sale now.

As previously mentioned, KRS-One and Naughty by Nature have shows soon too.

Watch some classic videos below...